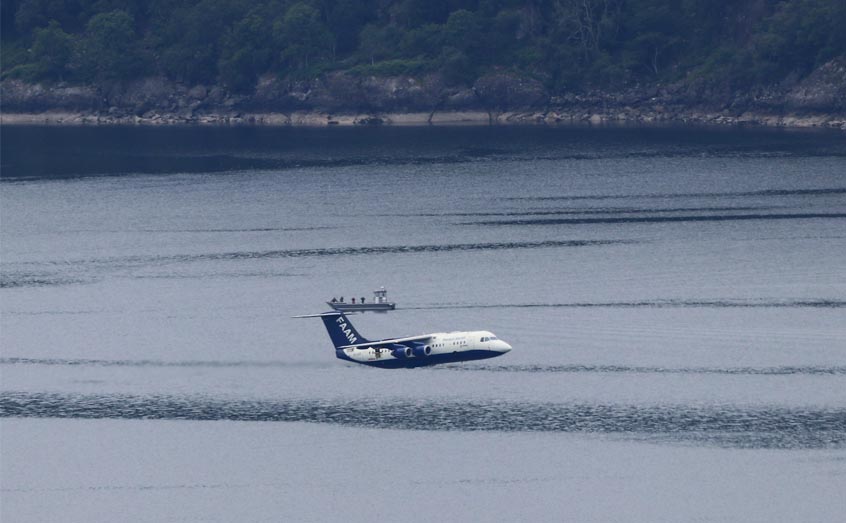 Researchers from SAMS joined the team behind the UK’s ‘flying laboratory’ to make unique measurements on Loch Linnhe, on Scotland’s west coast.

The 32-metre jet, managed by FAAM Airborne Laboratory, flew tracks over the loch to test the some of the aircraft’s four tonnes of instrumentation, while SAMS scientists below tested a prototype autonomous kayak that can take measurements at the water surface.

As the FAAM Airborne Laboratory aircraft took large-scale atmospheric measurements from the air, the SAMS prototype, known as the ImpYak, took detailed readings between the ocean surface and 50 centimetres above it.

It is hoped the respective readings from the flight on July 9 will help scientists better understand how heat and trace gases such as carbon dioxide are transferred between the air and the sea.

SAMS scientist Dr Phil Anderson explained: “We know that there is a transfer of carbon dioxide and heat between the air and the sea, but we don’t know exactly how much. We are hoping this unique combination of fieldwork measurements will address some important questions about the process.

“The aircraft took readings as low as 100 feet above the ocean surface but we also wanted to know what is happening just above the water line.

“In atmospheric terms, the membrane between the sea and the air is less than one millimetre thick – like a layer of clingfilm over the surface of the water - so it is difficult to study from a ship, which disrupts any measurements because of its size. The ImpYak will have less of an effect on this membrane and will give us useful data such as wind speed, temperature and humidity.

SAMS uses computer models of the atmosphere and ocean to help understand and predict the ocean, both for climate studies and to help the local aquaculture industry. These data from FAAM Airborne Laboratory in the air and the ImpYak at the surface will give an insight into where and when these models are less able to capture the reality of the environment.

During the four-and-a-half hour flight the FAAM Airborne Laboratory tested a new temperature sensor and a new greenhouse gas analyser.

FAAM mission scientist Dr Hannah Price said: “Flying over the loch at a range of altitudes, from 100 to 10,000 feet enabled us to collect data to improve our temperature sensors. It’s really challenging to make accurate temperature measurements when you’re flying along at 200 mph, and test flights like this one are really important for characterising our sensors. Flying at low level over the loch also allowed us to try out a new way of measuring fluxes of carbon dioxide and methane. Having the micro-meteorology measured on the loch surface by the SAMS team will give us really useful information when we come to analyse the data.”

The FAAM Airborne Laboratory is owned by the Natural Environment Research Council and managed through the National Centre for Atmospheric Science. The BAe146 aircraft has capability to measure a range of atmospheric processes, including cloud particles, greenhouse and pollutant gases, wind and turbulence.