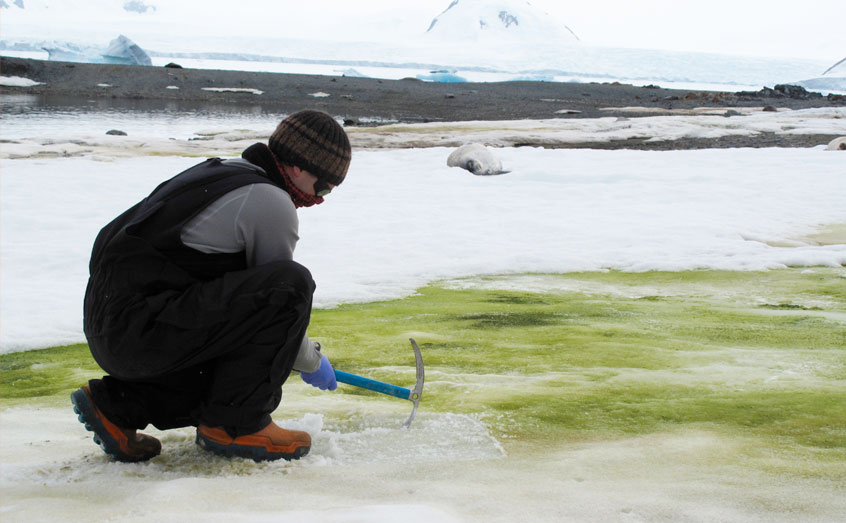 A scientist who led the creation of the first ever large-scale map of microscopic algae on the snow covered Antarctic coastline – so-called ‘green snow’ – has joined SAMS to continue his research.

Dr Matt Davey comes to the Oban-based institute from the University of Cambridge and has today published findings in the journal Nature Communications that show the current distribution of the algae and how they are likely to spread as the global temperature increases.

The research team from Cambridge and the British Antarctic Survey combined satellite data with on-the-ground observations over two summers in Antarctica to detect and measure the green snow algae. Although each individual alga is microscopic in size, when they grow en masse they turn the snow bright green and can be seen from space.

Dr Davey said his research could develop further following his move to SAMS, which hosts the Culture Collection of Algae and Protozoa, the UK’s algal library and one of the most diverse collections in the world.

He added: “This research shows that there is still much to discover about the biology of Antarctica and how it might change over the coming decades. Using the latest satellite and spectral imagery technology, combined with simple but essential field work, we were able to produce maps of terrestrial algal blooms in Antarctica for the first time.”

Blooms of green snow algae are found around the Antarctic coastline, particularly on islands along the west coast of the Antarctic Peninsula. They grow in ‘warmer’ areas, where average temperatures are just above zero degrees Celsius during the austral summer - the Southern Hemisphere’s summer months of November to February. The Peninsula is the part of Antarctica that experienced the most rapid warming in the latter part of the last century.

Dr Davey’s team found that the distribution of green snow algae is also strongly influenced by marine birds and mammals, whose excrement acts as a highly nutritious natural fertiliser to accelerate algal growth. More than 60 per cent of blooms were found within five kilometres of a penguin colony. Algae were also observed growing near the nesting sites of other birds, including skuas, and areas where seals come ashore.

The team used images from the European Space Agency’s Sentinel 2 satellite taken between 2017 and 2019, and combined these with measurements made on the ground in Antarctica at Ryder Bay, Adelaide Island, and the Fildes Peninsula, King George Island.

Snow algae are a key component of the continent’s ability to capture carbon dioxide from the atmosphere through photosynthesis. Dr Davey’s team identified 1,679 separate blooms of green algae on the snow surface, which would absorb around 479 tonnes of carbon dioxide per year, the equivalent of about 875,000 average petrol car journeys in the UK. The researchers say that the total amount of carbon held in Antarctic snow algae is likely to be much larger because carbon dioxide is also taken up by other red and orange algae, which could not be measured in this study.

Dr Davey, who started at SAMS in May as a new senior lecturer in algal biotechnology, said: “I am looking forward to advancing this and other essential research at SAMS and with other national and international collaborators. SAMS is ideally placed to advance polar algal biology, combining key areas in taxonomy, metabolic science and the space and drone sector. Having CCAP, a global leader in algal culture collections, research and resource provision within the institute was a key factor in my decision to move to SAMS.”