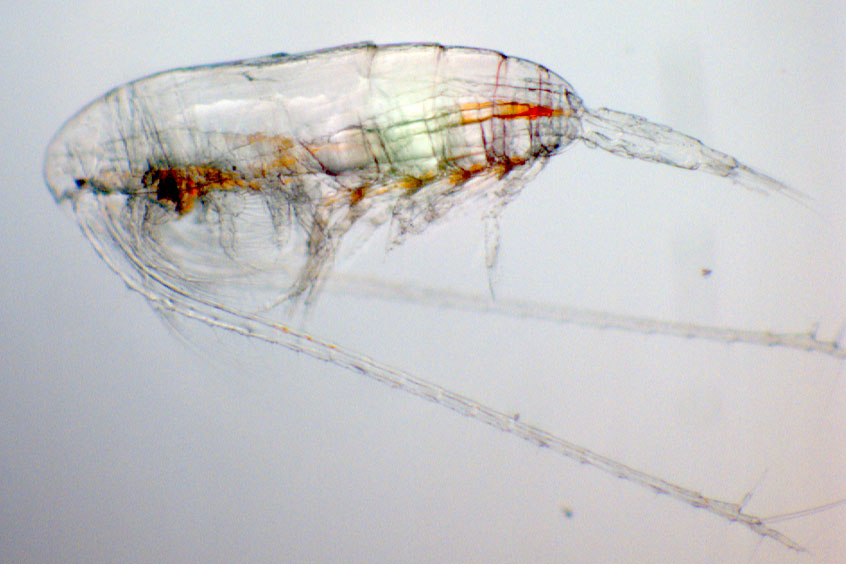 The copepod Calanus finmarchicus is a key zooplankter in the North Atlantic and was found to have an intact biological clock working even during the midnight sun in the high Arctic.

Marine biologists studying how climate change affects the Arctic found that despite permanent daylight during the Arctic summer internal biological clocks continue to provide the rhythm of life.

Researchers had previously suspected that the daily cycles of biology would cease during the Arctic summer when the sun is permanently above the horizon and day and night become indistinguishable. They expected the lack of a light-dark trigger to affect the proper functioning of the circadian clocks that affect tourists and marine plankton alike.

Today new research has been published that shows that the genes of tiny shrimp-like animal plankton called copepods keep ticking even under snow-covered sea-ice.

The project leader, Dr Kim Last from the Oban-based Scottish Association for Marine Science (SAMS), said: “It’s simply astonishing to know that these tiny copepods have a functioning circadian clock when they can be tens to hundreds of meters underwater and sea-ice at a time when there is virtually no difference between day and night.”

Interestingly the researchers found that whilst in the southern Arctic, circadian clock genes generally cycled daily, in the north and only a few hundred miles from the North Pole, their clock had changed.

Lukas Hüppe, lead author of the paper from the Helmholtz Institute for Functional Marine Biodiversity and the Alfred Wegener Institute in Germany, said: “We noticed that the circadian clock had changed from following a 24 hour cycle to a 12 hour cycle. We assume this means that the animals are using other signals to set their clock which may include the tides.”

A co-author of the paper, Dr David Wilcockson from the University of Aberystwyth said: “We know that many intertidal marine organisms have tidal as well as circadian clocks. These Arctic copepods may have the ability to modify or switch between clocks depending on where they end up.”

Copepods are essential to the Atlantic and Arctic food webs because they store fat and are the main food source for fish and many sea birds and whales. The findings will provide clues on their survival at very high latitudes.

Dr Last said: “Climate change is allowing these copepods to migrate northwards into habitats with extreme annual day/night cycles. Their ability to adapt their clock may give them an edge over resident copepods ultimately influencing the structure of the Arctic food web.”