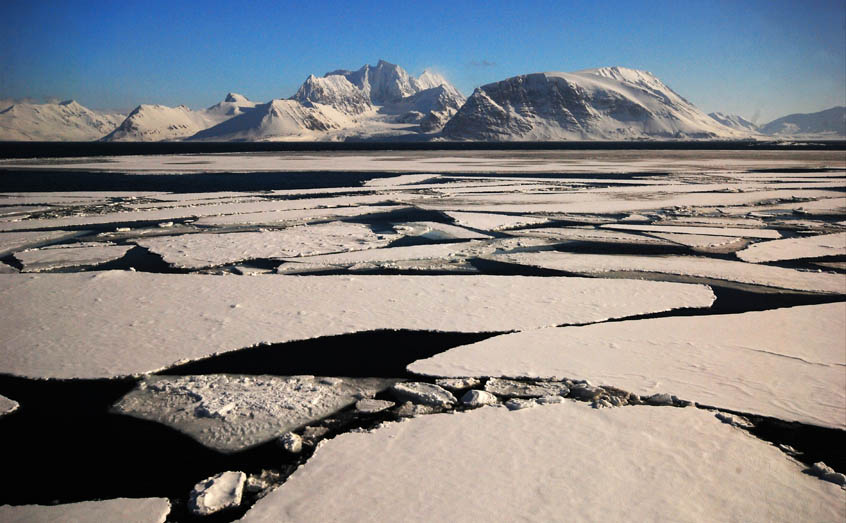 A reduction in Arctic sea ice, and the subsequent loss of energy-rich sea ice algae, is altering the menu of some key species on the ocean floor. Photo: Callum Whyte/SAMS

SAMS scientists studying the environmental impacts of reducing sea ice in the Arctic caused by climate change have revealed a glimmer of hope for the creatures in the dark depths of the ocean floor.

The year-on-year reduction in sea ice – parts of the Arctic could be ice-free in the coming decades – could spell disaster for the Arctic ecosystem, as the food web there is partly fuelled by the formation of so-called sea ice algae on the underside of the ice sheet.

In spring, as the ice naturally begins to melt, these ice algae sink through the water column, sparking a feeding flurry for a host of organisms, not least creatures on the seabed such as starfish, sea cucumbers and shrimp. These, in turn, are eaten by a range of fish, including those important to the fishing industry and which are the main source of food for larger predators such as beluga whales and seals.

Researchers from SAMS, a partner of UHI, looked at algae in the Barents Sea, north of Norway and found that seabed creatures may be able to sustain themselves on the more varied and abundant open water algae, when sea ice algae become scarce.

The findings, published in Frontiers in Marine Science today [Friday], are the first to estimate the contributions of sea ice and open water algae to the Arctic food web on the seabed. The paper suggests that while the more energy-rich sea ice algae are an important food item when they are available, the availability of open water algae may provide the energy to support seabed creatures.

Lead author on the paper, SAMS PhD student Ivan Cautain, said: “In this region of the Arctic you have a lot of seabed creatures, but you also have major fisheries, so it is very much a system in balance. The fear is that with the loss of sea ice and hence ice algae, we may also see a loss of animals on the seabed.

“However, it appears that seabed creatures have a varied menu. Even in very high northern areas with lots of ice, they were found to also feed on open water algae, which consist of a variety of phytoplankton, like other diatoms and dinoflagellates.

“In terms of food availability it seems like there will be options for seabed creatures, even in an ice-free Arctic. Although we now know where their dinner is coming from, the big question that’s yet to be answered is: is this new diet actually good for them?”

The researchers tracked molecules in the animals which allowed them to estimate how much of a creature’s diet originated from sea ice algae.  Sea ice algae were a major food source for seabed animals in areas with high ice cover – especially in the summer, a season important for reproduction and growth. However, even here, open water algae contributed to these creatures’ diets, suggesting a dietary flexibility which will allow them to respond to changing food sources due to ice retreat.

SAMS deep-sea scientist and co-author Prof Bhavani Narayanaswamy said: “To date we thought that the reduction in availability of sea ice algae would significantly impact the faunal community and potentially affect the food-web.

“However, these results indicate that whilst sea ice algae are important, we must not overlook the part that phytoplankton play in fuelling the Arctic ecosystem.

“This work illustrates how much we still have to explore in terms of the impact large-scale changes in the Arctic may have on the smaller animals living on, and in, the sediment.”

The paper ‘Uptake of sympagic organic carbon by the Barents Sea benthos linked to sea ice seasonality’ can be read here: https://www.frontiersin.org/articles/10.3389/fmars.2022.1009303/full