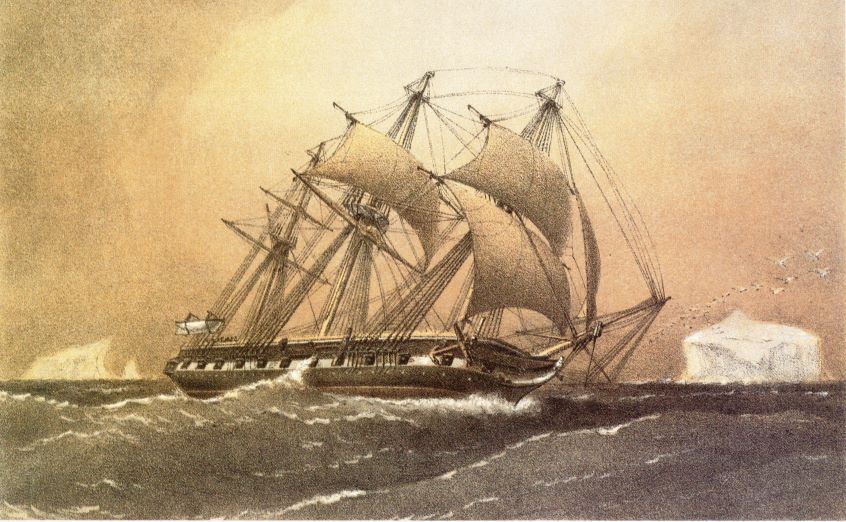 An illustration of HMS Challenger by William Frederick Mitchell

On the 150th anniversary of arguably the most important scientific voyage in the history of marine science, the vast knowledge it created has been consolidated for the first time on a new website launched today (Wednesday).

The Challenger Expedition (1872 - 1876), which sailed from Portsmouth, UK on December 21, 1872, was the first scientific voyage to chart the global ocean. The six scientists on board the refitted warship HMS Challenger discovered Challenger Deep, the deepest known point of the ocean, and catalogued thousands of previously unknown species.

The findings amounted to an incredible 50 published volumes of The Challenger Reports and data from the two summary reports have now been extracted and digitised for the first time on a new website (https://challenger-expedition.sams.ac.uk/) with funding from the Carnegie Foundation. The website is hosted by the Scottish Association for Marine Science (SAMS), Oban, a marine science research institute founded in 1884 by Challenger Expedition scientist Sir John Murray.

The website project was the brainchild of Prof Gillen D’Arcy Wood, an environmental historian at the University of Illinois and Carnegie Fellow, who enlisted the help of the university’s National Center for Supercomputer Applications to scan and digitise the mass of data contained in the Challenger Reports. Together, with manually transcribed data from University of Plymouth Professor Kerry Howell, Prof Wood has created the most comprehensive collection of publicly available Challenger data.

Prof Wood said: “The Challenger Expedition is an absolutely unique and enormous landmark in the history of science. The data collected is the treasure trove of marine science, as it gives a baseline of the conditions in our ocean before the heavy carbon emissions and pollution caused by the industrial revolution. It was the deep-sea equivalent of the Apollo missions of the 20th century.”

The website contains data from all 364 monitoring stations sampled during the expedition and users can follow the voyage, as well as search for information such as water temperature and the species found in each location.

As well as a one-stop-shop for Challenger data, the website has an interactive map that allows users to chart the voyage. Prof Wood hopes the resource will help researchers, while raising awareness among the general public.

“As an historian, the Challenger Expedition can be very overwhelming as it went on for so long and made so many discoveries, so it is hard to find that narrative that encapsulates what it achieved. Perhaps that is why it is not better known.

“This website is a gesture towards a more comprehensive telling of the Challenger story, but people can take what they want from it, whether they want to know what species were found in the Caribbean, or what the ocean temperature was around Australia.”

SAMS Director Prof Nicholas Owens, who has studied the life and work of Sir John Murray and his role in the Challenger Expedition, said he was delighted SAMS could host the new website.

He added: “The Challenger Expedition was a milestone in scientific history and we have never seen another scientific voyage on that scale. The work done by Sir John Murray on his return to Scotland was the beginning of what we call oceanography, so as the research institute he founded all those years ago, I think SAMS is a great fit to host this incredible online resource, which we will continue to develop.

“Even today, the Challenger data are playing their part. Marine scientists are seeking to answer pressing questions on huge topics such as climate change, ocean warming and the effects of deep-sea mining on the ocean floor. Having that snapshot in time as a reference point is invaluable as we work to find out how our world is changing.”

The Challenger Expedition was led by Scottish natural historian Sir Charles Wyville-Thomson of the University of Edinburgh. It travelled nearly 70,000 miles and identified around 4,700 new species. The science team also charted parts of the ocean floor and recorded temperatures and chemical properties from a vast range of ocean environments.