BLOG: Uncovering the secrets of our ocean 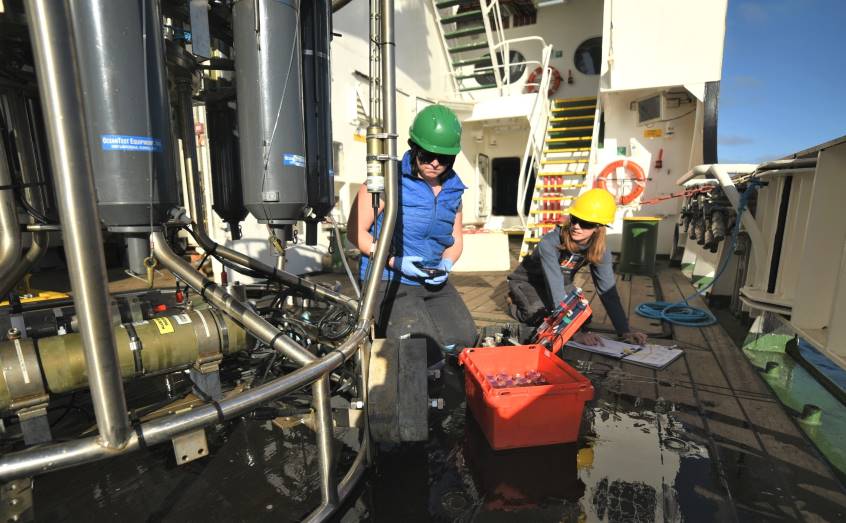 Dr Sam Jones is an oceanographer on the scientific cruise DY120, headed for the North Atlantic to undertake crucial data monitoring and retrieval work. But this cruise on board the RRS Discovery is very different to every other that has gone before, because of COVID-19. DY120 is only the second scientific cruise to leave the UK since lockdown in March and only half the original science team have been allowed on board. In the third of a series of blogs recording this unique experience, Dr Jones explains why the team's effort is so crucial to understanding how the ocean moves and, in turn, how this will affect our climate.

We often think of the world’s oceans as discrete systems, operating independently from one another. In fact, they are so deeply interconnected it is more appropriate to think of a single World Ocean, in constant circulation.

Like a vast, stately conveyor belt, water flows from the tropics to polar regions where it cools and becomes denser, pouring back along the basins and valleys of the seabed towards the lower latitudes. This flow encompasses every ocean basin and takes many hundreds of years to complete a full circuit.

A striking example of this process in action is the ocean’s delayed response to climate change: since the industrial revolution, the Polar seas have been taking in additional heat and pollutants from human activities and diligently storing them in the deep oceans of the world, where they will reside for many years before eventually resurfacing. Not gone forever, just filed under ‘to deal with later’.

The Atlantic segment of this flow is known as the AMOC: the Atlantic Meridional Overturning Circulation. ‘Meridional’ refers to the south-north nature of the flow, and ‘overturning’ describes its upwelling and downwelling components in the tropics and the poles, respectively. Despite its stately progress, the energy moved by the AMOC is staggering: roughly 1.25 Peta (1015) Watts of heat is continuously transported from the tropics towards the Atlantic Arctic via this mechanism, more than 60 times the present rate of world energy consumption. 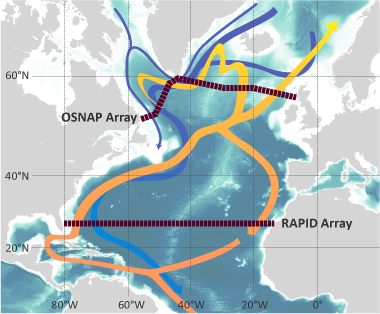 The idea that human activity could disrupt this immense current system was first considered in response to an unexpected result: in 1957 an ambitious hydrographic survey aimed to measure the total amount of water and heat transported by the AMOC using a line of observations between the eastern and western sides of the Atlantic ocean.

This effort successfully delivered a figure for the strength of the AMOC, and a follow-up experiment in 1981 was conducted to see whether anything had changed during the 24-year interval. Contrary to expectations, the transport was found to have decreased significantly. The discrepancy was tentative evidence that this seemingly inexorable current system was slowing down.

A possible culprit for the slowdown was forthcoming: The Polar ice caps store vast amounts of fresh water, and human-induced climate change has added to existing ice melt, causing more fresh water to flow into the Polar oceans. Fresh water reduces the density of seawater so has the potential to disrupt the engine that drives the AMOC; water in the Arctic may no longer have sufficient density to sink and flow towards the tropics.

This phenomenon would not be unprecedented: there is much evidence that such slowdowns occurred due to melting at the end of the last ice age, as recently as 8,200 years ago. This is the scenario portrayed in the movie ‘The Day after Tomorrow’: it’s true that the warm, salty North Atlantic Current keeps Western Europe relatively mild and that a reduction in this current could lead to cooling in the northern hemisphere. That the current could ‘switch off’ in a matter of days, leading to polar super-hurricanes and an influx of wolves into New York is less scientifically rigorous, but in the interests of dramatic cinema we’ll let that slide. 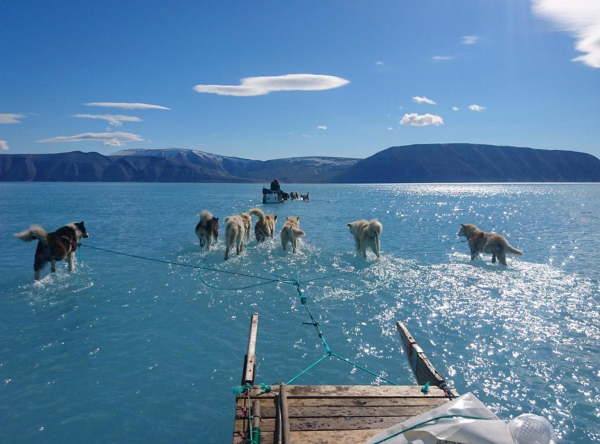 After the discovery of an apparent slowdown in the AMOC, it was imperative that we learned more about the Atlantic portion of the ocean conveyer belt. How quickly was it slowing down? What would be the implications for climate in the northern hemisphere? How sensitive would it be to future changes in climate?

To answer these questions, the RAPID mooring array was instigated in 2004. It comprised a line of deep ocean moorings maintained between Morocco and Florida to continuously measure the AMOC in a more comprehensive manner than had previously been possible. The data provided by this array demonstrated that the slowdown was real, but more gradual than had initially been feared. However, the scale of year-to-year and even seasonal variability in current strength was far greater than expected.

A large unknown remained: how much of the water which passes through the RAPID array reaches the Arctic to cool and sink, and how much just recirculates in the North Atlantic? To answer this question and better understand the engine which drives the AMOC, it was decided that a second array of instruments – a ‘gateway’ across the entrance to the Polar seas – was needed.

This mooring array stretched from Western Scotland, via Greenland, to the east coast of Canada and was named OSNAP (the Overturning in the Sub-Polar North Atlantic Program). This international effort has been maintained since 2014 and has offered further insight into the inner workings of the ocean conveyer belt. We now know, for example, that most of the cooling and sinking occurs east of Greenland, and not in the Labrador Sea as was previously thought. In addition, most of the strong year-to-year changes in AMOC strength originate in the stormy seas of the Eastern North Atlantic where we currently find ourselves.

The moorings we are recovering during DY120 have survived for two years in the Atlantic Ocean, weathering some of the roughest seas on the planet. The data contained in these moorings adds to four years of existing OSNAP data, so increases the total duration of our time series by 50%, a significant boost to our understanding. Each mooring consists of tens of instruments distributed along a wire, which is anchored to the seabed and kept vertical by a series of buoyant floats. Due to the depth of the ocean basins, most of the moorings are several kilometres long, so the task of recovering each mooring intact onto a relatively small vessel, downloading data and redeploying in precisely the same location is non-trivial.

We have now moved from the Rockall Trough into the Iceland Basin, and each successful mooring turnaround feels like a significant triumph given the challenges in getting to this point.