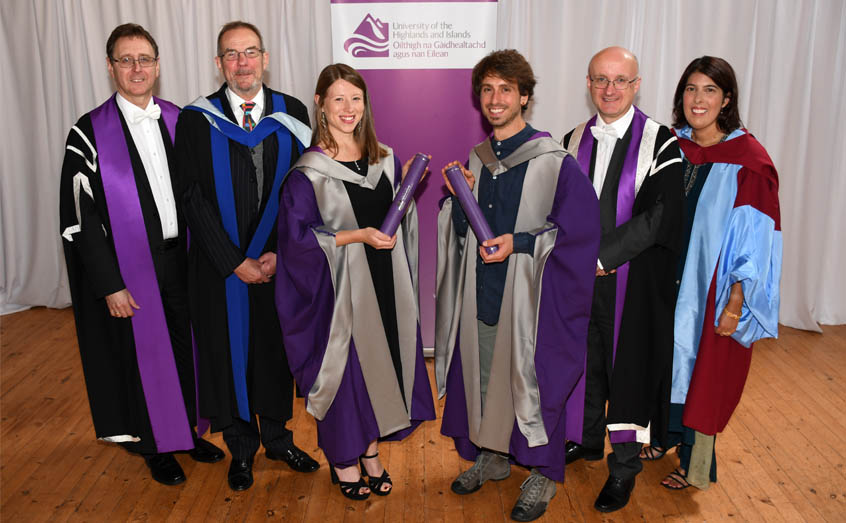 A microplastics researcher has become the first person to graduate with a doctorate from the University of the Highlands and Islands. Winnie Courtene-Jones (29) from Cardigan, Wales was presented with the qualification at the Scottish Association for Marine Science UHI graduation ceremony in Oban on Friday 6 September.

Dr Courtene-Jones’ PhD thesis explored the extent of microplastic pollution in the deep sea. Her research, the first long-term study in this area, found that 48% of creatures which live 2000 metres below the surface of the sea have ingested microscopic pieces of plastic. The study sampled starfish and snails from the Rockall Trough off the Western Isles.

Speaking about her historic award, Dr Courtene-Jones said: “It’s a great feeling to finish my PhD. It has been a challenging, but incredibly fulfilling experience. Being awarded the first University of the Highlands and Islands’ PhD was an unexpected, but fantastic bonus.

“I chose to study here because I wanted a PhD experience that was more personal and intimate. I wanted to be part of a university which knew who I was. The reputation of SAMS UHI was also a factor in my decision. I have enjoyed the opportunity to broaden my knowledge by mixing with researchers from different marine science disciplines and I have had a fantastic experience studying in such a beautiful location. It has been so much more than just a PhD.”

Dr Courtene-Jones is now embarking on a research fellowship at the University of Plymouth where she will work with the renowned marine microplastics expert, Professor Richard Thompson OBE, the academic who first coined the term ‘microplastics’. She will lead the scientific research into marine microplastics on a project known as eXXpedition: Round the World, a pioneering, all-women sailing expedition to circumnavigate the globe with the aim of raising awareness of and explore solutions to the environmental and health impacts of single-use plastics and toxics in the ocean.

Dr Courtene-Jones received her qualification alongside 24 other graduands at the Oban ceremony. Andrea Garvetto (31) from Garessio, Italy, was also awarded a PhD at the event, becoming the second person ever to receive a doctorate from the university.

Professor Crichton Lang, Interim Principal and Vice-Chancellor at the University of the Highlands and Islands, said: “Gaining research degree awarding powers was a key milestone in the development of our university. I am delighted to see this come to fruition today as we present our first doctoral degrees. I would like to congratulate Dr Courtene-Jones and Dr Garvetto on their achievements and wish them every success in their future careers.”

SAMS UHI Director Professor Nicholas Owens said: “I am very proud that a SAMS UHI student is to receive the first PhD from the university and it is fitting that an award-winning scholar like Winnie should have that honour.

“Her research on the effects of microplastics on deep-sea organisms has not only helped to establish SAMS UHI as a centre for marine plastics research but has added considerable knowledge to the research effort globally.

“When Winnie and Andrea today become Drs Courtene-Jones and Garvetto, we will be witnessing a significant milestone in the development of the University of the Highlands and Islands and a confirmation that our research offering is going from strength to strength.”

The project to create a university in the Highlands and Islands of Scotland was set up by organisations including the Highlands and Islands Development Board and Highland Council in 1992. The project became a corporate entity in 1993, receiving funding from the Millennium Commission, local authorities, the Scottish Office and Europe. The institution was able to award degrees from 2008 and achieved full university status in 2011.