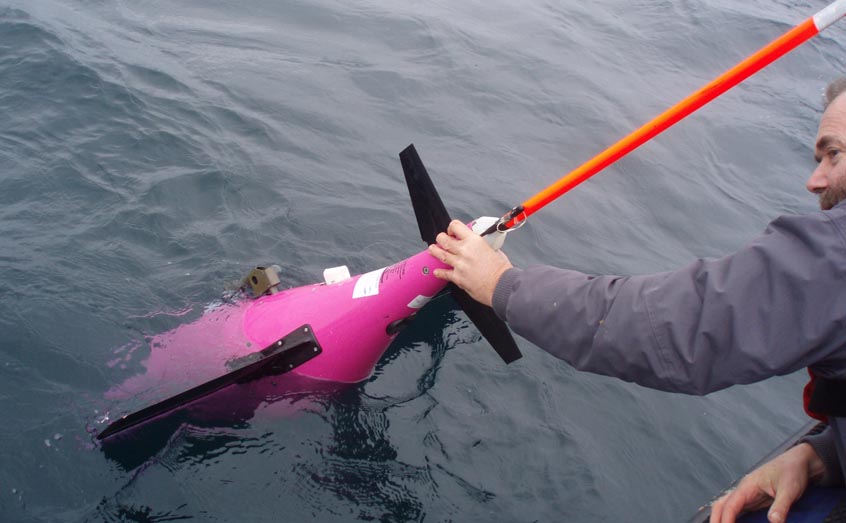 Gliders are autonomous instruments that use a clever combination of changes in buoyancy and pitch to glide through the water column to depths of around 1,000 metres, returning to the surface to transmit data such as sea temperature and salinity via satellite to a ‘glider pilot’.

This economical use of power allows the glider to spend months at sea, giving researchers access to more data than ever before.

Since SAMS launched its first glider, named Talisker on October 12, 2009, the SAMS glider fleet has completed 38 missions, clocking up a total of 68,238 kilometres – the circumference of the globe is 40,075 kilometres.

During this time, gliders have allowed oceanographers to make estimates relating to the transport of water along the North Atlantic current and observe its exchanges with the Arctic Ocean.

They have made it possible to watch real time data on chlorophyll levels in the water, showing the beginning of the Arctic spring bloom that is so important to life in the region and have patrolled the seas over long winter months, a near impossible task for humans.

SAMS oceanographer Dr Marie Porter uses glider data to study ocean currents in the north east Atlantic and Arctic seas. She said: “Through gliders we are seeing things we have never seen before.

“They record the ocean in fine detail, taking a sample up to every 5 seconds. These high resolution data are so important given the pace of climate change, particularly in the Arctic region.”

“Because we can’t usually launch a research ship in rough winter seas, our understanding of the ocean in general is based around summer. Crucially, autonomous instruments such as gliders are filling in those winter data gaps.”

Over the past 10 years SAMS has deployed 19 different gliders that have spent 4,201 days in the water, completing 44,617 dives. They have been launched from 17 different vessels and operated by 15 different pilots.

SAMS Director Prof Nicholas Owens said: “One of the most valuable uses of the data obtained from gliders is to validate ocean computer-based models used in future climate predictions.

“Given the extreme urgency of planetary warming, we need all the data we can get, especially from highly sensitive regions like the north-east Atlantic.”

SAMS has access to the UK’s Marine Autonomous Robotics Systems pool, based in Southampton but owns Talisker, the glider that made the maiden mission to the Rockall Trough, off Scotland’s west coast.

Talisker is still in operation today and has clocked up more than 12,000 kilometres, spending nearly two years at sea. Over the past 10 years two other gliders have joined the SAMS fleet: Ardbeg and Corryvreckan.

SAMS, as part of the University of the Highlands and Islands, now also offers an Oceanography with Robotics stream to its Marine Science Degree course, reflecting the emerging importance of autonomous underwater vehicles in marine science.

Click here to learn more about gliders and SAMS' other autonomous underwater vehicles.