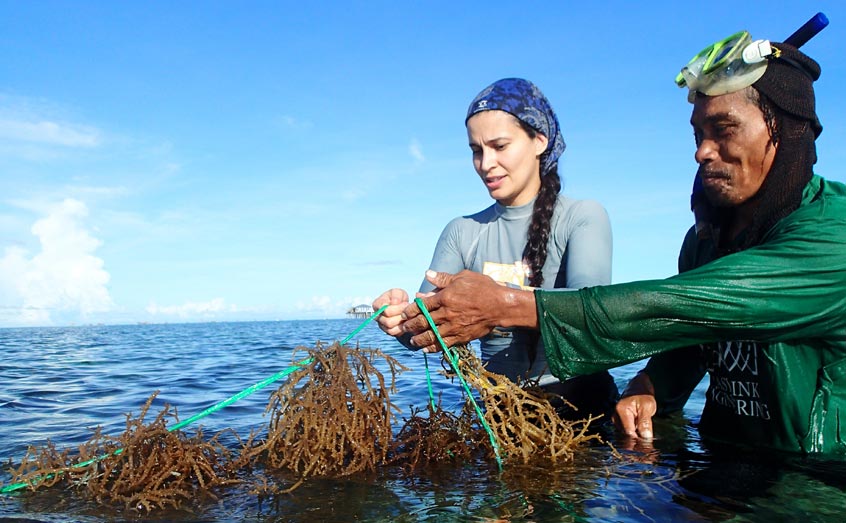 Dr Valeria Montalescot of SAMS helping to harvest seaweed at a farm in Bohol, Philippines as part of the GlobalSeaweedSTAR project. Photo: Maria Luhan

Governments from around the world are considering how best to safeguard the rapidly expanding global seaweed industry, following advice from researchers at the Scottish Association for Marine Science (SAMS).

Worth around $5billion annually, the seaweed industry is largely based in south-east Asia, China and west Africa, sustaining coastal communities in many developing countries. Seaweed production more than doubled in size globally, from 13.5 million tonnes in 1995 to 30 million tonnes in 2016; as a food, seaweed is a rich source of micronutrients (iron, calcium, iodine, potassium and selenium), vitamins and Omega-3 fatty acids.

The Food and Agriculture Organisation (FAO) now intends to include seaweed alongside marine animals, such as finfish and shrimp, in producing advice on biosecurity, which aims to prevent the spread of disease and pest species.

Seaweed had not been included in the initial biosecurity planning until a presentation made at a recent (FAO)-led meeting in Paris by SAMS scientist Professor Elizabeth Cottier-Cook, the leader of the GlobalSeaweedSTAR project – a UK-funded research effort to improve the sustainability of the global seaweed growing industry. FAO is currently developing a management framework for aquaculture biosecurity, the so-called Progressive Management Pathway, alongside representatives of the World Organisation for Animal Health (OIE), the World Bank, the Norwegian Agency for Development Cooperation (NORAD) and more than 25 other countries from around the world.

Seaweed aquaculture biosecurity is now the subject of a side-meeting at the FAO’s Sub-committee on aquaculture (COFI/AQ) in Trondheim from August 22 – 26. From this meeting, Prof Cottier-Cook and her team are hoping to produce a technical document on seaweed biosecurity for FAO approval.

Professor Cottier-Cook, who has previously authored an international policy brief for the seaweed cultivation industry, said: "Although a traditional means of cultivation in many parts of the world, production of seaweed has grown exponentially over the past 30 years.

"The inclusion of seaweeds in the FAO Progressive Management Pathway is a huge step forward for the industry, which currently suffers from pest and disease outbreaks."

Dr Iona Campbell, who also attended the meeting in Paris along with Prof Cottier-Cook, said: "The GlobalSeaweedSTAR presentation summarised the importance of the seaweed industry in global aquaculture, the similarities in biosecurity challenges that the industry is facing, and the significance of including the industry in such a globally driven strategy.

"This is the first time that the seaweed industry has been represented in the process of the consultation, and it will continue to be formally included in the global action plan as a result."

To find out more about the UK Research and Innovation (UKRI)-funded GlobalSeaweedSTAR project visit: www.globalseaweed.org