Whale returns to the ocean after SAMS stranding 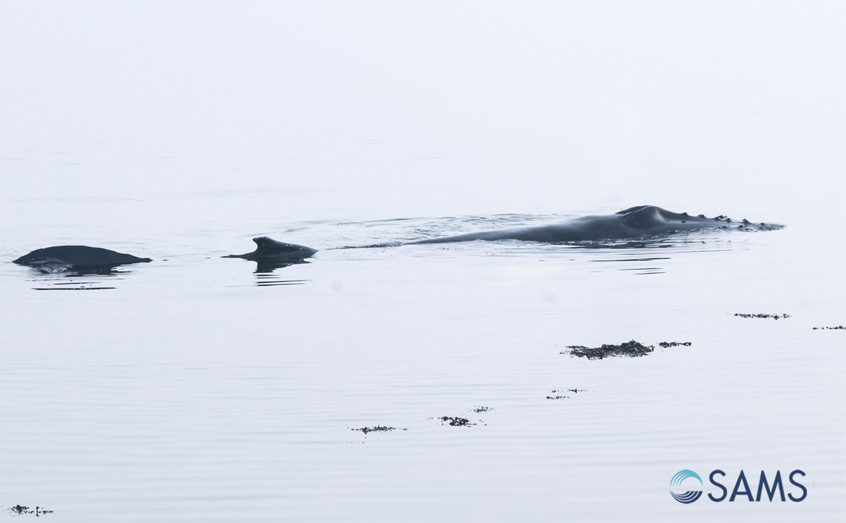 Students at the Scottish Association for Marine Science (SAMS) had a real life marine conservation lecture when a young humpback whale became stranded on the shore outside the institute near Oban.

The mammal was spotted by a member of the public in Dunstaffnage Bay today (Thursday), just metres from the SAMS campus. SAMS staff and students joined rescuers from British Diver Marine Life Rescue, Police Scotland, Scottish Fire and Rescue Service and HM Coastguard in monitoring the whale, before it managed to free itself on the rising tide and return to open water.

Marine mammal ecologists at SAMS feared for the young whale, which initially appeared to be grounded on the shore near the research laboratory and the pontoon where the research vessels are moored. There have been recent instances of humpback whales becoming entangled in fishing equipment or mooring line in Scottish waters and there was concern that this might be one such case.

To monitor the animal the scientists deployed an acoustic device to listen for underwater sounds and also observed the whale’s breathing pattern.

A number of SAMS staff and students had gathered to catch a glimpse of the animal but lecturer Dr Steven Benjamins ensured his marine conservation class ran on time by moving the lesson from the classroom to the shoreline.

SAMS researchers also launched a drone to fly above the whale and help rescuers and the Scottish Marine Animal Strandings Scheme establish that the animal was not entangled. As they waited for the afternoon’s high tide, the whale managed to move further into the bay.

The drone footage will help marine vets analyse the whale’s width, relative to its length, in order to assess the health of the mammal.

Marine ecologist Prof Ben Wilson, who heads up SAMS’ marine mammal research, said: “Humpback whales have been more commonly sighted of Scotland in recent years, as they travel northwards to feeding grounds off Norway and Iceland. However, it is still unusual to see one, particularly this close inland.

“We were very concerned for the whale’s welfare and our plans changed as the incident developed. Thankfully, the whale managed to free itself on the rising tide and we watched it leave for the open water. It was certainly a great learning experience for our students who study marine science here full time on a University of the Highlands and Islands four year undergraduate degree programme.

“Our thanks go to the emergency services in attendance and the British Divers Marine Life Rescue for their rapid and co-ordinated response and professionalism.”