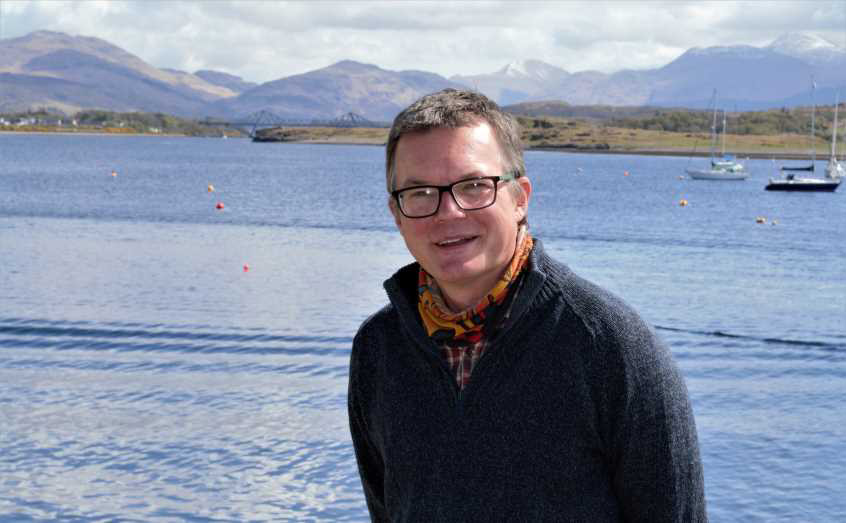 A marine geologist who helped to form the marine science degree at the Scottish Association for Marine Science (SAMS) UHI 21 years ago has been awarded a professorship from the University of the Highlands and Islands.

Professor John Howe was one of four scientists who established the BSc marine science programme; Professors Axel Miller, Keith Davidson and Mark Inall have also previously received the academic title from the university.

All four scientists remained at SAMS UHI and oversaw the development of the university's marine science degree programme, which has grown from six students in 2000 to 120 currently studying at the Oban-based institute. As well as now including specialisms in Arctic studies and oceanography with robotics, the degree programme allows students to travel to Svalbard, the Caribbean and the US as part of their studies.

Professor Howe, who currently leads the BSc programme, will give his inaugural professorial lecture, ‘Getting into deep water: adventures in marine geology', on World Oceans Day, Tuesday 8 June.

He said: "It is a tremendous honour to be recognised by the university in this way.

"I feel privileged to have played a part in the early years of the university. Writing the degree programme was incredibly exhilarating and challenging, so it is very satisfying to see it grow and flourish. In the beginning, there were just the four of us teaching. There are now 34 staff directly involved in teaching.

"The most terrific thing is seeing students come to us, develop their knowledge and then go off to get amazing jobs and travel the world."

Professor Howe is also an active researcher, specialising in seabed mapping including using marine robotics. As part of his research, he recently discovered 12 underwater wrecks of ships and wartime planes off Oban, as part of a wider project to map the seabed off the west coast.

Over the last 23 years at SAMS UHI, he has explored the seabed off Scotland, including the famous Corryvreckan whirlpool, and travelled to Svalbard, Antarctica, Papua New Guinea, Tanzania, Chile and the deep Atlantic Ocean.

"Even with improvements in seabed mapping technology we still have a very limited knowledge of the geology of our oceans and there are still many mysteries waiting to be solved," he said.

Professor Howe, who lives in Bonawe, came to SAMS UHI in 1998 when the institute was known as Dunstaffnage Marine Laboratory. It was almost exclusively a marine science research centre until it became a founding partner of the UHI Millennium Institute.

Originally from Bournemouth, he previously worked at the British Antarctic Survey in Cambridge

Prof Axel Miller, now Deputy Director at SAMS UHI, said: "I am absolutely delighted to welcome Prof Howe into the Professoriate: It is a highly deserved recognition of his tireless work on behalf of the university and the success of its marine science students.

"On top of his international renown as a marine geologist, his prowess as an educator has been recognised on several occasions in the ‘inspirational lecturer' category of the Highland and Islands Students' Association annual awards."

Professor Todd Walker, Principal and Vice-Chancellor of the University of the Highlands and Islands, said: "The title of professor is the highest level of academic achievement which can be awarded. It is reserved for individuals who are recognised as leaders in their field and who have demonstrated excellence in their work.

"Professor Howe is a worthy recipient. He has played a vital role in the development of our BSc (Hons) marine science degree, a course which attracts students from across the world, and has made significant contributions to our understanding of seabeds around Scotland and beyond."

Anyone wishing to attend the online inaugural professorial lecture, can find out more at www.uhi.ac.uk/en/media/events