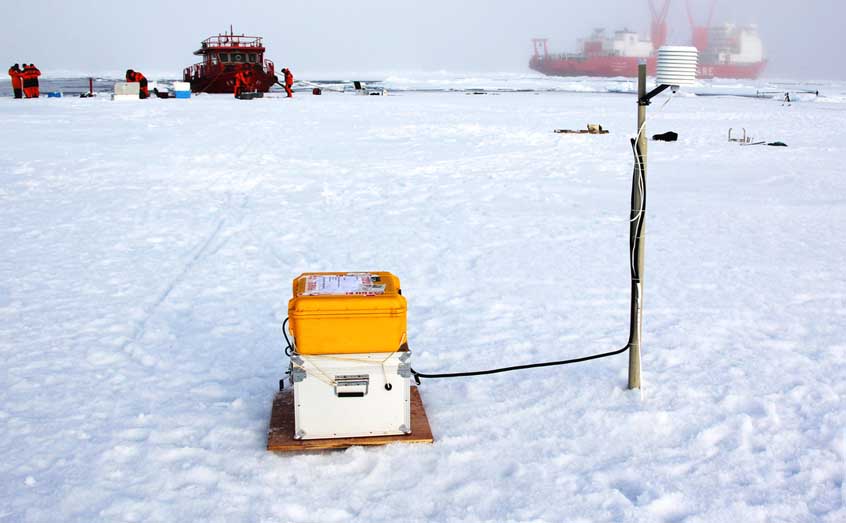 SIMBA units can withstand temperatures as low a -40 degrees Celsius, making them ideal for work in the Arctic.

The German Research Vessel Polarstern has arrived in the Arctic where it will lock itself in the sea-ice and drift for an entire year. Hundreds of scientists will visit the ship in that time to use it as a base from which to study the climate.

As part of the research activity, polar scientists will deploy up to 18 hi-tech devices, developed by SRSL, known as Sea Ice Mass Balance Arrays (SIMBA), which can remotely measure the location, thickness and the melting rate of sea ice.

The sensors, which are designed to withstand temperatures as low as minus 40 degrees Celsius, are contained within a box no larger than a briefcase. They are currently used throughout the world but never have so many been used in one co-ordinated study of sea-ice.

The 130 million Euro project, Multidisciplinary Observatory for the Study of Arctic Climate (MOSAiC), has seen Polarstern head to the Siberian sector of the Arctic ocean to find the most suitable place in the floes for the Polarstern to begin its drift.

Precise positioning will be important. Modelling of the winds and currents suggests the ship should drift across the top of the planet, getting to within a couple of hundred km from the North Pole, before then being ejected from the frozen floes between northeast Greenland and Svalbard - the Fram Strait.

Its scale means it must be an international effort. RV Polarstern will also be supported by icebreakers from Sweden and China. In deep winter, when these vessels can't pierce the ice to reach the German ship, aeroplanes and long-range helicopters will deliver the supplies and relief teams.

Prof Nicholas Owens, Director of SAMS and Chief Executive of SRSL said: “It is thrilling to know that we are playing a small but significant part in this historic and grand experiment.

“Continuous observations in harsh and unpredictable environments such as the high Arctic are challenging and it takes international collaborations and clever technologies to make it possible.

“Through oceanographic moorings and marine robotics we are constantly learning more about the Arctic Ocean but the SIMBA units will give a unique insight into Arctic ice melt, a major indicator for rising global temperatures.”

SRSL’s partners involved in this project include the Alfred Wegener Institute (AWI), the Finnish Meterological Institute (FMI), the Polar Research Institute China (PRIC) and the Arctic University of Norway (UiT).

More than 400 scientists from 19 countries, including some of the world’s top Arctic researchers, will participate in MOSAiC.