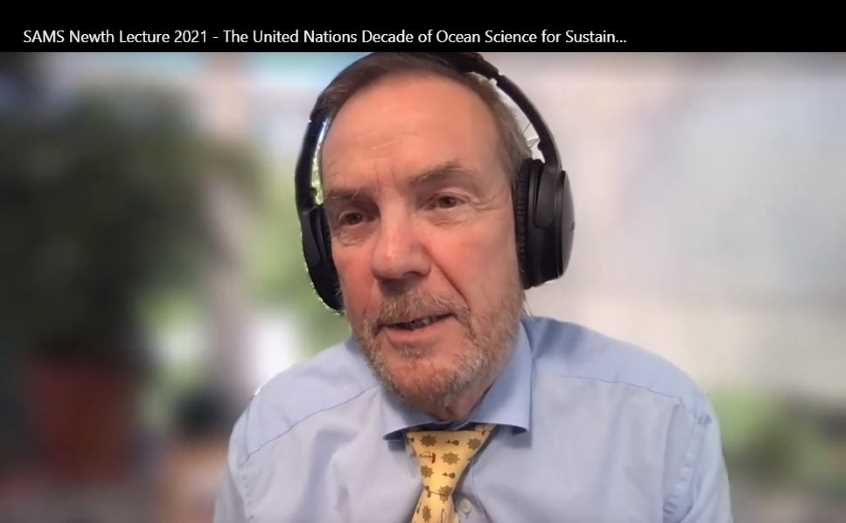 For the first time in its 21-year history, the annual SAMS Newth Lecture was a virtual event, as people from around the world tuned in to a live broadcast.

The event last Friday (June 18) was also the first Newth Lecture to have multiple speakers, giving different perspectives on the topic, the UN Decade of Ocean Science for Sustainable Development.

All the speakers addressed the question of how Scotland could play its part in the UN Decade of Ocean Science for Sustainable Development. While Prof Visbeck opened proceedings with a global overview of the Decade, Dr Grist and Mr Russell, in particular, stressed the importance of involving individuals and communities.

The event was ably chaired by former BBC science editor Susan Watts, who is a SAMS trustee.

Of the 143 people in attendance, the majority were from across the UK but registrations were also taken from Dubai, Australia, India, Puerto Rico, Indonesia, USA, Switzerland, Nepal and Germany.

Prof Owens said: “We have become accustomed to finding new ways of working and the Newth Lecture is just another event in which we have had to prove our creativity and flexibility as an organisation.

“Thankfully, we have the technology to deliver such a successful online event. As a partner in the University of the Highlands and Islands, our staff and students were already used to delivering lectures online before the pandemic struck.

“However, extending this format to the wider SAMS and marine science communities was another step in our development of online communication and allowed us to share our special event with many more people.”

Prof Newth had a distinguished scientific career at the interface between biology and medicine.

From 1965 to 1981 he was Regius Professor of Zoology at the University of Glasgow and when he became SAMS President in 1973 he faced a considerable challenge. The decade of the 1970s was difficult for the association. A significant part of SAMS’ finance from the Science Vote of the Department of Education and Science was transferred to other government departments, and projects had to be identified that would win contracts from them. Large collaborative research programmes were coming into vogue, while fish farming on the west coast was growing rapidly and the offshore oil industry was developing. At the same time, the climate of opinion was swinging against science.

In his six years of office, Prof Newth steered the association with a strong and sure hand. Thereafter he served as a Vice-President until his death on 5 June 1988 at the age of 66.