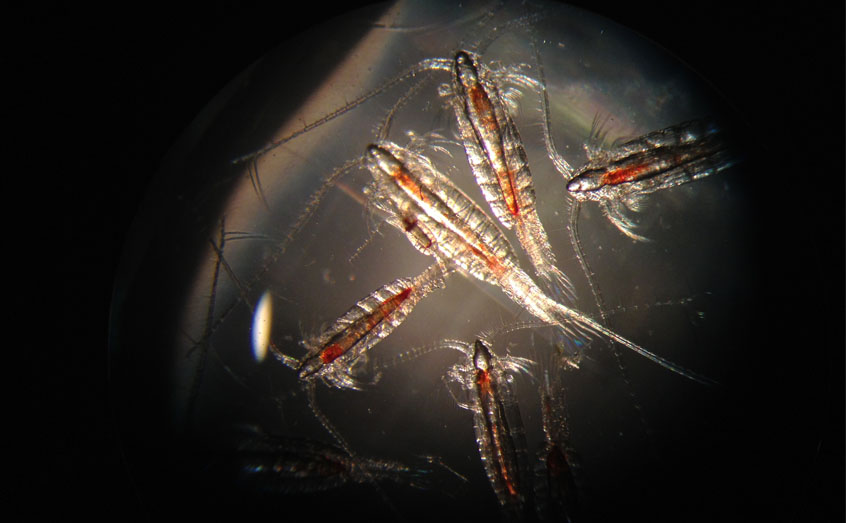 The zooplankton Calanus finmarchicus can be found throughout the northern hemisphere

The world’s largest daily commute happens in our oceans, as fish and zooplankton – key components in the food web – travel up and down in the water column in response to the sun as it sets and rises.

But marine scientists have now discovered that zooplankton at the most northerly point of the globe prefer life in the slow lane, rising and falling in apparently random patterns and responding to changes in light that happen just twice a year at the North Pole.

Zooplankton are the primary food source for many species of fish and are therefore important in sustaining life in our ocean, but we know relatively little about their movements.

Arctic researchers from the Scottish Association for Marine Science (SAMS), the University of Strathclyde, and UiT The Arctic University of Norway studied zooplankton populations collected at the North Pole. This part of the world experiences two seasons: one long summer, in constant light, and one long winter in complete darkness. These periods are known as the midnight sun and the polar night.

Using acoustic sensors, scientists discovered that the normal daily commuting pattern, known as diel vertical migration (DVM), did not apply. Instead of using the daily light cycle to dictate their movements, these rebellious North-Pole dwellers appear to enjoy the freedom that comes with just one day and one night in any given year.

The findings have been published in the journal Marine Ecology Progress Series and suggest that at some point between 81 and 89 degrees north, zooplankton stop moving in unison to the daily solar cycle as they do elsewhere in the world.

Lead author Dr Laura Hobbs of SAMS and the University of Strathclyde said: “While their more southerly colleagues commit to a gruelling daily commute of all rising towards the surface to eat during the night and diving to hundreds of metres at sunrise to avoid predators, the North Pole zooplankton seem to have escaped the rat race altogether. Whilst zooplankton here continue to migrate, they do so in an unsynchronised fashion.”

The only evidence of a mass migration in the high Arctic is in late February and August each year when the ‘midnight sun’ and the ‘polar night’ periods begin.

“In the high Arctic, the best time to feed is August; there is plenty of food available, and the sun is approaching the horizon ready to set, so we generally see zooplankton sitting higher in the water column,” said Dr Hobbs. “In late February, as the north pole enters its spring equinox and the midnight sun starts there is a general movement downwards.”

Marine scientists have previously observed this unsynchronised migration at lower latitudes for the few weeks a year that the midnight sun lasts.

However, this is the first time that such a high latitude has been studied in this way.

Prof Jørgen Berge of UiT The Arctic University of Norway added: “Everywhere we have looked for these migrations in the oceans, we have found them at some point during the year. We think that this might be the one place on the planet that synchronised daily migrations in the ocean don’t exist. But then again, why should it? In a place where each year is just one long night and one long day, it makes little sense to keep up the hectic life that fish and zooplankton further south lead!”