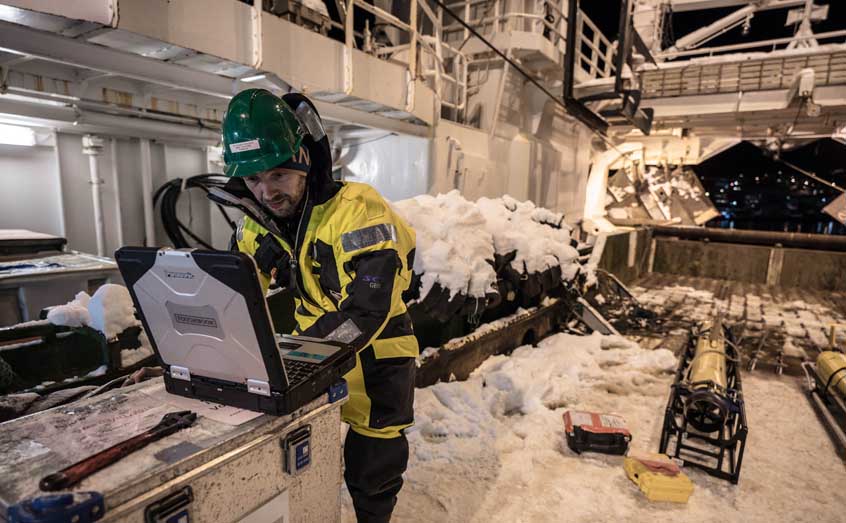 Arctic researchers worked during the 24-hour darkness of the polar night to assess how marine organisms respond to light. Photo by Michael O. Snyder

Marine scientists have used the cover of darkness to expose how ‘light pollution’ is affecting creatures in the Arctic Ocean.

Working during the depths of the constantly dark Arctic winter in January 2018, a team of Norwegian and UK researchers used a novel strategy of switching off every source of light, plunging themselves into complete darkness, to examine the marine biology of the polar north.

By then using a super sensitive light sensor developed at Oban’s Scottish Association for Marine Science (SAMS) and echo sounders to detect the presence of organisms in the Barents Sea, they discovered that marine creatures, from tiny zooplankton to fish, reacted to even the smallest detection of light, often moving away from the source.

Light dictates how marine organisms behave, acting as a prompt for when to migrate through the water column to find food and avoid predators. It is hoped this latest discovery will allow scientists to better predict how an increase in light penetrating the Arctic seas – a result of the reducing sea ice cover brought on by climate change –  will impact on marine communities.

The findings, published in Communications Biology, also raise questions over how we currently survey Arctic marine populations in winter, including commercially-important fish.

SAMS Arctic scientist Prof Finlo Cottier, a co-author on the paper, led the UK contingent on the expedition. He said: “During the polar night, marine organisms respond to the faintest of natural light during months of darkness. We therefore believed that introducing artificial light from a ship or even a head torch might not give an accurate sample of what is happening down there.

“Switching off the lights gave us a much clearer picture of natural behaviours in the ocean.”

Co-author Dr Phil Anderson of SAMS added: “Using a super sensitive light sensor developed at SAMS we could see just how sensitive these organisms were to light.

“We were able to capture the few photons of light that are scattering in the ocean at that time of year, conditions that the human eye would consider to be pitch black. Even the smallest detection of light was enough to make these marine organisms react.”

The team found that fish and zooplankton exhibited an almost instantaneous response when suddenly exposed to artificial light. What’s more, this reaction was recorded 200 metres deep, the maximum depth of the water surveyed.  This suggests that extreme caution must be taken when conducting scientific surveys or stock assessments with artficial light during the Arctic winter.

Project leader and lead author on the paper Prof Jorgen Berge, from UiT The Arctic University of Norway, has been investigating the ecology of the polar night for nearly a decade. He said: “This is another discovery about the responsiveness of organisms to light, in one of the darkest places on surface of the planet.

“We’re slowly understanding how the black box of the polar night functions.”

The study, which was supported by the Research Council of Norway, is the first to document the effect of artificial light on an entire pelagic community.

The publication ‘Artificial light during the polar night disrupts Arctic fish and zooplankton behaviour down to 200 m depth’ can be accessed here: https://www.nature.com/articles/s42003-020-0807-6