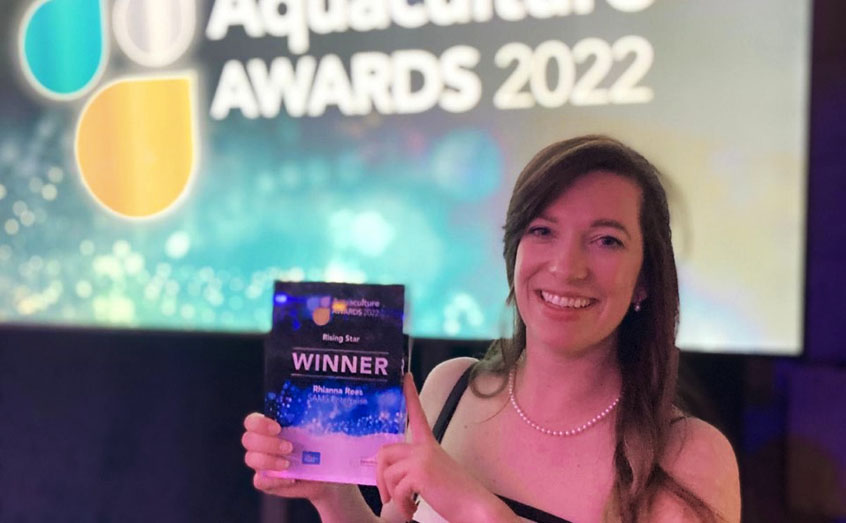 SAMS celebrated further seaweed success at this year’s Aquaculture Awards after the co-ordinator of the newly launched Seaweed Academy picked up one of the top awards.

Rhianna Rees was jointly awarded the Rising Star award at the ceremony in Aviemore on Wednesday night (May 4) alongside Andre Van of Kames Fish Farm.

The award comes a week after the launch of the Seaweed Academy, the UK’s first dedicated seaweed industry facility, using the research knowledge generated at SAMS to offer advice to start-ups, train workers and share the latest research to help businesses develop. The £400,000 funding for the project came from the UK Government’s Community Renewal Fund.

The success of the Seaweed Academy launch at SAMS, which attracted nearly 200 people and hundreds more virtual attendees, demonstrated the huge scope of interest in seaweed cultivation in the UK and Europe.

As a precursor to the launch event last Tuesday (April 26), 200 primary school children visited SAMS to learn more about seaweed, its uses and its potential. Other invited guests had the chance to visit the SAMS seaweed farm and the seaweed nursery, where seed stock is grown and ready to be deployed on seaweed farms.

Rhianna said: “Words cannot describe how grateful, surprised, proud, and honoured I am to have been awarded Aquaculture UK Rising Star award.

“This was a win for seaweed, for SAMS, and everyone in the team who has worked so hard to achieve all the things we have so far as part of the Seaweed Academy.”

Head of SAMS Enterprise Mike Spain said: “This is a tremendous achievement for Rhianna, who has established an incredibly comprehensive and high-quality Seaweed Academy project in a short period of time. She brings energy, enthusiasm and expertise to the role of co-ordinator and thoroughly deserves this accolade.

“It has been an incredibly busy and rewarding few weeks for the SAMS Enterprise team but also for the developing seaweed farming industry as a whole.

“As the profile of seaweed cultivation grows, we move ever closer to a thriving new industry for the UK and Europe. SAMS Enterprise is helping to lead that movement.”

Globally, the seaweed farming industry is estimated to be worth around $15billion per annum. However, the vast majority of this activity is in Asia and there is huge growth potential in Europe, with a growing demand for seaweed from gourmet restaurants to livestock feeds.

Find out more about the Seaweed Academy: https://www.seaweedacademy.co.uk/