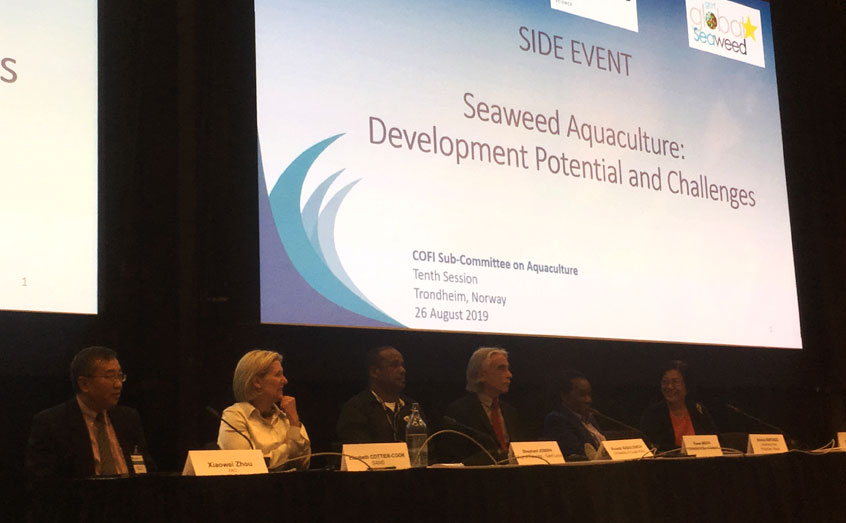 An audience of United Nations delegates attending the FAO Sub-Committee on Aquaculture in Trondheim this week, has called for more work to be done to understand the global seaweed industry, after hearing from SAMS scientist Professor Elizabeth Cottier-Cook and five other international experts.

The industry was valued at around US$12 billion in 2017, and supports millions of families worldwide. Seaweed production grew globally from 13.5 million tonnes in 1995 to 30 million tonnes in 2016; as a food, seaweed is a source of nutrients, vitamins and Omega-3 fatty acids, but it is also used globally in the food processing industry, as a thickening agent.

Prof Cottier-Cook, who leads the Global Challenges Research Fund (GCRF) GlobalSeaweedSTAR research project, told delegates at the meeting how this rapidly expanding industry faces a number of key challenges including disease and pest outbreaks, which can lead to whole farms being shut down.

She said governments from around the world had to consider how best to safeguard the industry.

Following the presentation, key messages from the expert panel included; a call for the seaweed industry to be scaled up, both at the country and local farm level, alongside initiatives to address the lack of specific policies and guidelines for seaweed biosecurity.

Prof Cottier-Cook said: “I am very grateful for the opportunity to appear in front of the UN FAO sub-committee on aquaculture and to highlight the importance of the seaweed industry globally.

“It was also extremely pleasing to have had such an enthusiastic response from the member state representatives and an acknowledgement from the sub-committee that they were interested in receiving more information on seaweed aquaculture in future sessions."

Work already undertaken by the GlobalSeaweedSTAR project, a four-year UK Research and Innovation (UKRI) funded programme to improve the sustainability of the global seaweed industry was presented at the side event and the team hopes to work with the FAO to develop a biosecurity action plan for this industry.

Prof Cottier-Cook, who has previously authored an international policy brief in association with the United Nations University on safeguarding the sustainable development of the seaweed industry, said: “Although, seaweeds have been grown for many years in Asia, production of seaweed has grown exponentially over the past 30 years and is now increasingly being grown in countries with no tradition of consuming seaweed for food.

“The recommendation by member states at the Trondheim meeting that ‘aquatic plants’, which include seaweed, should be included in the development of their Progressive Management Plan for Aquaculture Biosecurity is a huge step forward for the industry, which currently suffers from pest and disease outbreaks and the risks associated with introducing non-native species."