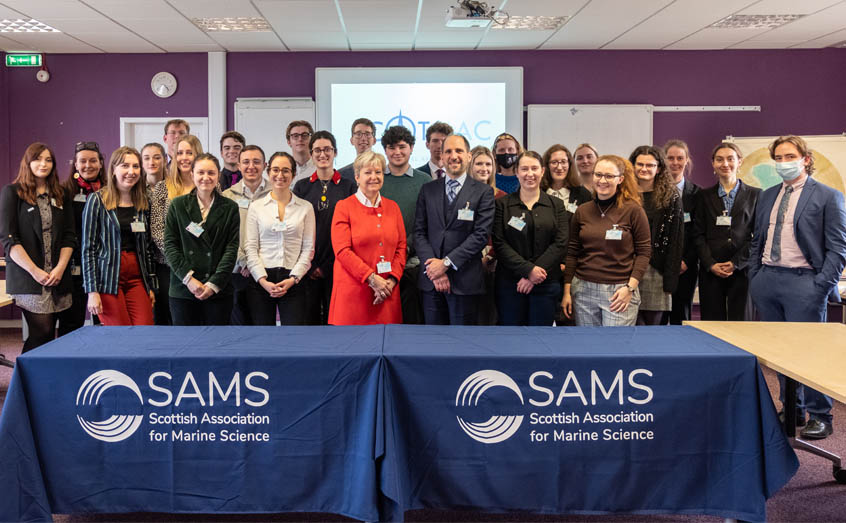 Participants in the first ever Scottish Model Arctic Council (ScotMAC), which was hosted at SAMS.

Students from around Scotland came to Oban to play their part in the first-ever Scotland Model Arctic Council (ScotMAC), a three-day simulation of the Arctic Council, the top international forum for co-operation, environmental protection, and sustainable development in the Arctic.

Hosted by the Scottish Association for Marine Science (SAMS) from March 11 - 13, SCOTMAC was an educational initiative of Polar Aspect and the Scottish-Arctic Network (ScAN) of universities.

SAMS is an academic partner of the University of the Highlands and Islands, one of seven Scottish universities that make up ScAN. Students from all seven of these universities, as well as students from universities elsewhere in the UK and abroad, took up roles as diplomats from the eight member states and six Indigenous Peoples’ organisations that sit around the Arctic Council table.

In the course of the simulation, they worked together to reach consensus on significant challenges facing the Arctic today—the growth of Arctic shipping, and the transmission of Indigenous Knowledge from elders to youth.

The students’ deliberations took place against the backdrop of the invasion into Ukraine by Russia.  With the real Arctic Council having paused its activities following the Russian invasion, there was a strong “No to war” message coming from the simulated equivalent.

Addressing the participants, SCOTMAC Director and Polar Aspect Managing Principal Dr Anthony Speca condemned the Russian attack on Ukraine, and deplored the tragedy unfolding there, telling the student delegates: “In these circumstances, SCOTMAC takes on new importance. As young people concerned to promote peace and dialogue, you have the chance to demonstrate the power of collaboration, cooperation and consensus.”

Dr Speca also noted that, despite the fact that Russia currently chairs the real Arctic Council, no SCOTMAC participant would have to accept a Russian chairmanship even fictively, as he and his Secretariat chaired proceedings neutrally.

SCOTMAC was partly funded through the Scottish Government’s Arctic Connections Fund, which provides financial support to Scottish organisations to work with Arctic counterparts.

The SCOTMAC participants heard from the Scottish Government’s Minister for Culture, Europe and International Development, Neil Gray MSP, who joined the event via video link.

Mr Gray remarked on the similarities between Scotland and the Arctic, and the expertise Scotland can contribute. He said: “Scotland faces many demographic challenges. 98% of our landmass is classified as rural but it contains only 17% of our population. We have 96 inhabited islands and the population density of the Highlands and Islands is amongst the lowest in Europe, similar to some parts of the Arctic.

“Beyond the challenges posed by that rurality – from fuel poverty to loneliness – retaining young people in those areas is difficult. And many parts of the Arctic are experiencing the same issues.

“This is a clear example of why working with our Arctic neighbours can bring mutual benefits and help us develop joint solutions.”

The Minister also spoke on the effects of climate change, adding that Scotland had world-leading Arctic scientists, such as those at SAMS, and through the Scottish Alliance for Geoscience, Environment and Society (SAGES), Scotland is home to Europe’s largest glaciology group.

Addressing the current crisis in Ukraine, Mr Gray, who has been given responsibility for the Scottish Government’s approach to supporting Ukrainian refugees, added: “I have no hesitation in supporting the [Arctic Council] joint statement condemning Russia’s unprovoked invasion of Ukraine.

“Scotland stands for democracy, human rights and the rule of law at home and abroad.”

Participants in SCOTMAC were also privileged to have the expert guidance of Honorary Chair Marie-Anne Coninsx, formerly European Union Ambassador to the Arctic and the first to hold that title. She said Scotland was a fitting place for a simulated Arctic Council, adding: “You have a First Minister who goes to Arctic conferences and I recall a phrase she used that Scotland is closer to the Arctic than it is to London.”

Ms Coninsx emphasised the importance of including young people in diplomacy and said that science and innovation was the biggest hope for ensuring a sustainable Arctic region. She also warned of the catastrophic effects of climate change on the Arctic, from reindeer in Lapland starving because rain is regularly freezing on top of snow, preventing them from grazing, to the melting of permafrost (a layer of permanently frozen soil) undermining around 70 per cent of Arctic infrastructure.

Reflecting on her experience as a diplomat in Arctic matters, she said: “In a nutshell, the Arctic is not about polar bears on ice; it is a region where four million people live. There are different ‘Arctics’. The Canadian Arctic is totally different to the European Arctic.”

Dr Speca echoed this message strongly, stressing to student delegates that they must understand the Arctic as a homeland for its many peoples, rather than as an empty wilderness to cordon off or an unclaimed resource frontier to exploit.

SCOTMAC host Prof Finlo Cottier, an Arctic researcher at SAMS, said: “As Scotland continues to develop its relationship with Arctic nations it is essential that we understand the challenges, priorities and common values within the Arctic. ScotMAC has given young people the opportunity to explore key issues in the Arctic today, to negotiate and reach consensus.”

ScotMAC was held in collaboration with Trent University in Canada, and with funding from the Scottish Government Arctic Connections Fund and SAGES.

A new round of the Arctic Connections Fund opened to applications this week. For more information, please visit https://www.gov.scot/arcticfund.