A 'seaweed revolution' at SAMS 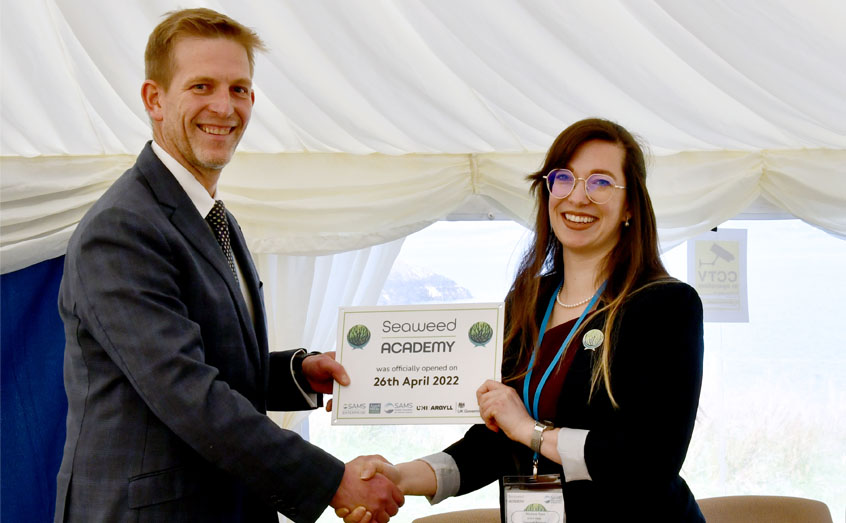 The emerging UK seaweed farming industry takes a huge step forward today (Tuesday) as the Seaweed Academy at the Scottish Association for Marine Science (SAMS) in Oban is officially opened.

The Seaweed Academy is the UK’s first dedicated seaweed industry facility, using the research knowledge generated at SAMS to offer advice to start-ups, train workers and share the latest research to help businesses develop. The £407,000 funding for the project has come from the UK Government’s Community Renewal Fund.

As a precursor to the launch event, 200 primary school children visited SAMS on Monday, April 25 to learn more about seaweed, its uses and its potential. Other invited guests had the chance to visit the SAMS seaweed farm and the seaweed nursery, where seed stock is grown and ready to be deployed on seaweed farms.

Today’s official opening included a panel session and a host of speakers including Vincent Doumeizel of Lloyd’s Register Foundation and United Nations Global Compact; Laurence Rockey, Director of the Secretary of State for Scotland; Prof Todd Walker, Principal and Vice-Chancellor of University of the Highlands and Islands (UHI); and Diana Murray, Chair of the SAMS Board.

Globally, the seaweed farming industry has been growing exponentially and is estimated to be worth around $15billion per annum. However, the vast majority of this activity is in Asia and there is huge growth potential in Europe, with a growing demand for seaweed from gourmet restaurants to livestock feeds.

Mr Doumeizel said: “12,000 years ago, human beings moved out of prehistory when they began cultivating plants on land. Today, our growing population and pressing ecological concerns lead us to look once more at this forgotten ocean treasure.

“Education is absolutely critical here as we collectively need to learn from this past experience in the ocean to build a sustainable future on land. A Seaweed Academy to train future seaweed pioneers is the best to reconnect altogether with sea vegetables. It may well be a new revolution for our civilization, a Seaweed Revolution!”

The Seaweed Academy will be operated by SAMS, in partnership with SAMS Enterprise and UHI Argyll, a fellow academic partner within UHI, and will deliver immediate economic benefit to Argyll and Bute. It also aims to stimulate the growth of UK seaweed aquaculture, exploring high-value markets, and using the latest research to increase the competitiveness of UK products globally.

SAMS will also promote seaweed production as a means of bioremediation, including the resulting carbon sequestration, therefore mitigating the impacts of climate change.

SAMS Director Prof Nick Owens said: “Using our own seaweed farms and the most up to date research, we have been laying foundations for a thriving UK seaweed farming industry. We are excited to officially open the Seaweed Academy and demonstrate how we can provide a centre for training, education and business development.

“SAMS works internationally on seaweed research and we are well placed to deliver the most up-to-date advice for start-ups and existing farmers who wish to develop their business. Seaweed farming is an industry that can support coastal communities, like the ones we have across the Highlands and Islands, while showing others an example of the best of the blue economy.”

To help fully embed the new industry at a community level, SAMS’ Ocean Explorer Centre (OEC) will develop STEM educational outreach materials to raise awareness of seaweed farming, climate change and the importance of net zero, from primary storytelling to workshops for Higher/A-level curricula, ensuring a holistic approach from primary to PhD level and beyond.

The UK Government Community Renewal Fund pilots new programmes that invest in people, boost skills and support local business – to build more communities that people are proud to call home. The £200 million Fund is supporting almost 500 projects in towns, villages and coastal communities across the whole United Kingdom to ensure that no place is left behind as the UK Government delivers on its commitment to level up the country.