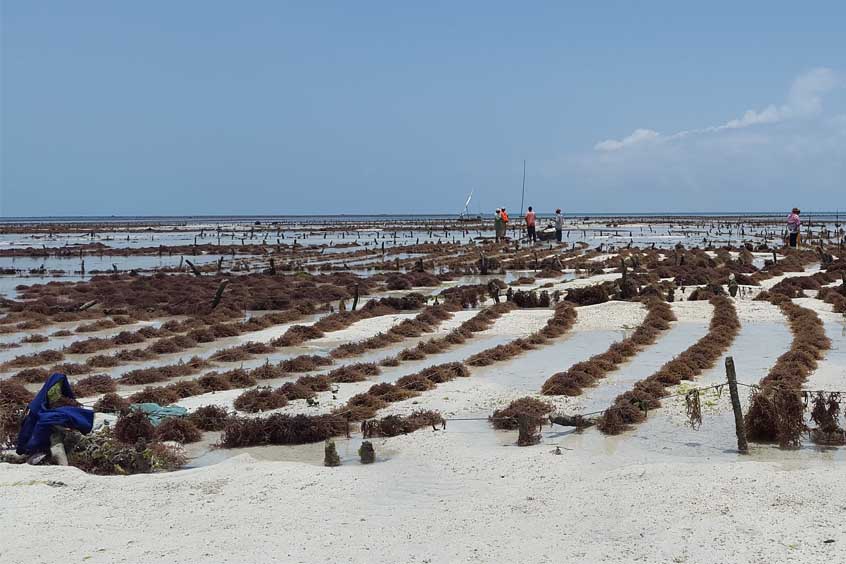 Seaweed farming in Zanzibar contributes 7.6 per cent of the islands' GDP

A world-renowned seaweed expert has told a meeting of UN representatives and global organisations today (Thursday) how the seaweed industry is helping people in developing nations escape poverty.

Dr Flower Msuya, from Tanzania, is representing the UKRI-funded GlobalSeaweedSTAR programme at the meeting, Seaweed Manifesto: Towards Implementation, which is taking place as a side-event at the 75th UN General Assembly.

The Seaweed Manifesto, developed by Lloyd’s Register Foundation and the UN Global Compact, defines a vision for global seaweed production. This manifesto is seen as a crucial step in safeguarding and developing the industry, which is well established in Asia and parts of Africa and South America, but is also expanding in other parts of the world.

Dr Msuya said: “Seaweeds have been proven to be a livelihood enhancer in emerging countries in Asia, Africa, South America and so on. It employs a large number of farmers, who benefit directly from the industry, together with their families and communities around them, including service providers.

“For example, the industry employs 30,000 farmers in Tanzania and is the third largest in the Zanzibar islands, where it contributes around 7.6 per cent of the islands’ GDP.”

Seaweed farming is the fastest growing of all aquaculture sectors globally, worth over USD 5 billion annually. Dr Msuya will tell the meeting that this crucial industry faces immediate threat from climate change and a lack of research in this area.

She said: “For a brighter future for the industry, we need to link farmers to researchers, governments, the UN, NGOs and businesses to give them courage to continue. We also need to support research and innovation, which will help the industry overcome the challenges associated with climate change, such as warming waters.

“Seaweed-producing nations should also be encouraged to use their own produce, rather than exporting all the raw material, and we must create an attractive environment that encourages young people to join the industry.”

The Scottish Association for Marine Science (SAMS), in Oban, leads the GlobalSeaweedSTAR programme and is a major contributor to the manifesto.

Programme leader Prof Elizabeth Cottier-Cook, of SAMS, said: “The seaweed industry is crucial to so many coastal communities in the developing world. It provides income to millions of families, often allowing women to become economically active in areas where few other opportunities exist.

“I’m delighted that a special side-event dedicated to seaweed is being held during the 75th anniversary UN General Assembly, giving it a global platform from which to highlight key challenges and discuss how to grow the industry sustainably.”