Interest in seaweed cultivation is growing 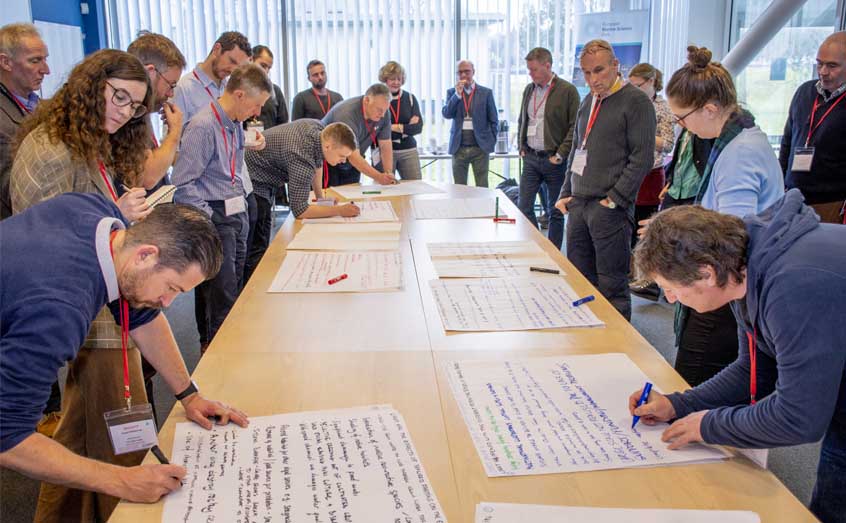 Attendees at a SAMS workshop on the sustainability of Scottish seaweed cultivation note the hopes and risks for a future industry.

The town hosted 180 attendees at the fourth annual Scottish Seaweed Industry Association (SSIA) meeting last Tuesday and the following day around 80 delegates attended workshops at SAMS to discuss the future of the industry in Scotland. Researchers showcased the many areas of seaweed research ongoing at the institute and gave presentations on how it can support industry development.

The workshops were run through four research projects: GENIALG, the socio-environmental benefits of seaweed farming; INTEGRATE, the capitalisation of Integrated Multi-Trophic Aquaculture (IMTA) in the Atlantic Area; AquaVitae, a survey on seaweed farming policy; and a University of the Highlands and Islands Bryden Centre PhD looking at the social acceptance of an economically viable seaweed industry.

The workshop event’s lead organiser Dr Adam Hughes, who heads up the Blue Economy research area at SAMS, said: “The interest in the Scottish seaweed industry has grown massively and this means we need to  consider the various implications and the stakeholders involved, alongside the potential for expansion and sustainability.

“To this end, SAMS is delighted to be at the forefront of these developments. Our involvement in a number of projects, covering topics as diverse as seaweed disease, cultivation and social acceptability makes us well placed to assist this burgeoning industry.

“Based on the enthusiasm and innovation I encountered in the past week, I look forward to seeing what the future holds.”

The SSIA conference was this year moved into the main hall at the Corran Halls to reflect the growing interest in the sector from researchers, businesses and local and national government. SAMS was represented by 14 research staff and its marine science consultancy, SAMS Research Services Ltd (SRSL).

SRSL Head of Enterprise David Guthrie said: “There was a real cross-section of visitors to this year’s conference. I spoke with established seaweed companies, to aspiring seaweed farmers, as well as researchers, manufacturers and investors.

“This created a real impetus in the room and I had many conversations with people about what these developments might mean for the region, and Scotland as a whole.”

As one of the keynote speakers on the opening day, Dr Zalina Dzhatieva of Argyll and Bute Council presented a report compiled by SAMS, entitled Feasibility of Seaweed Farming in Argyll and Bute and Emergent Opportunities.

Explaining that the council saw potential in Argyll and Bute as a centre of seaweed farming excellence, Dr Dzhatieva said the report had generated significant interest with industry experts from as far afield as Greenland, Faroes Islands, Norway, France, USA and Russia.