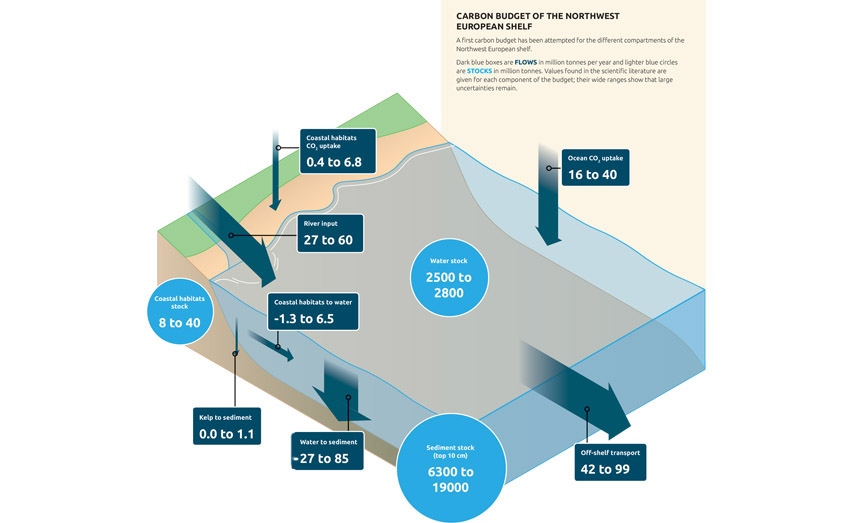 Ocean scientists examining the waters off the UK have shown how the mud on the ocean floor is vital to the planet by drawing billions of tonnes of carbon dioxide (CO2) from the atmosphere.

SAMS research fed into the five-year UK Shelf Sea Biogeochemistry research programme, a comprehensive study looking into how the shelf seas around Britain are affected by human activities and examining the hidden benefits provided by the seafloor. Shelf seas are regions of shallow water, less than 200m in depth, between the shoreline and the open ocean. The UK sits on the edge of the North West European Shelf.

And this week, the team shared their findings with representatives of the Scottish Government and Marine Scotland Science.

But one of the more striking discoveries made by researchers was the crucial role shelf seas sediments played in the storage of CO2 – so-called ‘blue carbon’ – reducing the amount going into the atmosphere and potentially slowing the pace of climate change.

It is estimated that shelf seas sediment stores between 6 and 19 billion tonnes of CO2. This is significantly larger than the amount taken up in the seawater (up to 2.8 billion tonnes), and up to 40 tonnes in the coastal habitat.

Dr Hicks said: “We knew that sediment was an important store of carbon, but this work allowed us to measure this in detail, and over seasonal changes. Although the focus on carbon storage in marine systems usually focuses on vegetated habitats such as seagrass, saltmarsh or coral reefs, this work  shows just how important our seabed is in terms of climate change.

“There is still a huge amount of uncertainty around how the sediments take up this carbon, and what influences this process. We also need to measure the potential impact of human interactions on the sediment, such as dredging and drilling, renewable energy installations and pollution.”

The UK Shelf Sea Biogeochemistry research programme was a £10.5 million study co-funded by the Natural Environment Research Council (NERC) and the Department for Environment, Food and Rural Affairs (Defra).  Results included a much-improved understanding of the role of shelf seas in removing and storing carbon blue carbon, and the lessons for policy in monitoring, managing and valuing these precious habitats.

These findings provide evidence for Defra, the devolved administrations and other stakeholders to help ensure the sustainable use of the UK marine environment.

Dr Phil Williamson, the Science Coordinator of the UK Shelf Sea Biochemistry (SSB) programme said: “The seas around Britain are amongst the best-studied in the world.  Yet we are only just finding out how the many complex processes occurring there fit together.  Whilst this research programme was aimed at a better understanding of the big picture, the team also discovered many new facts on what is actually going on, and how our nearest part of the ocean might be vulnerable to future change”.

The SSB programme brought together more than 100 researchers from 15 universities and research centres, and involved more than ten research cruises on RRS Discovery and RV Cefas Endeavour, mostly in the Celtic Sea. The programme’s findings will help inform policy development in support of the sustainable use of the UK’s marine resources.