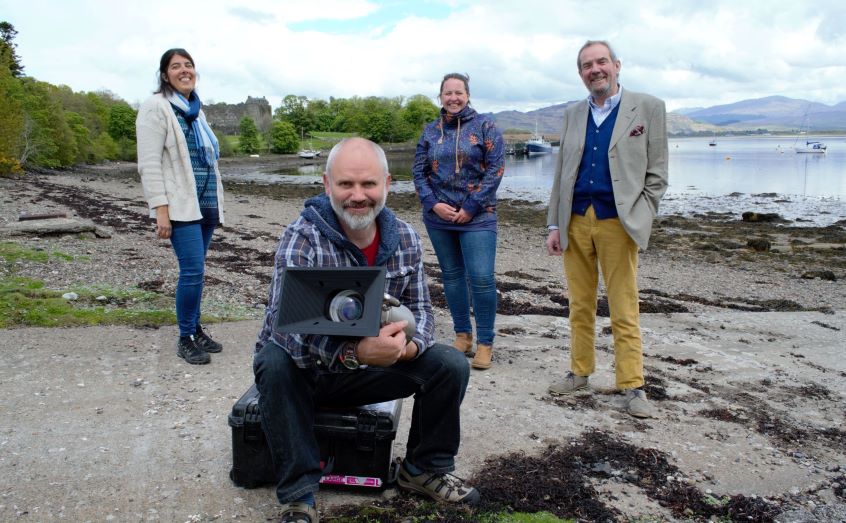 A high-tech underwater camera, built to withstand pressures at six kilometres below the surface of the ocean, has been gifted to SAMS to support its research.

The Sulis 4K deepwater camera system was previously used in the Black Sea for filming the recent Black Sea MAP expedition, revealing ancient wrecks located more than two kilometres below the ocean surface. The device was commissioned by Andy Byatt, an executive producer and director for Black Sea Films, who is known for his work on high profile programmes such as the BBC’s Blue Planet series.

Mr Byatt is from Argyll and follows the research activities of SAMS. He suggested the camera be donated to the Oban-based institute when the Black Sea MAP project ended.

Mr Byatt said: “I was delighted to suggest SAMS, a registered charity and research organisation, as the beneficiary of this incredible system, which was built by Adam Gobi of the Sulis Subsea Corporation for Black Sea Films and the filming of the Black Sea MAP expedition, led by Professor Jon Adams of Southampton University.”

SAMS Director Prof Nicholas Owens said he was excited to see the Sulis 4K deepwater camera system at SAMS and thanked both the Julia and Hans Rausing Trust, which funded the original Black Sea expedition, and Mr Byatt for suggesting SAMS as the new home for the system.

The camera can be used for coastal work, as well as deep-sea science, and will allow SAMS researchers to explore new regions of the ocean, which still hold many unsolved mysteries.

SAMS deep-sea scientist Prof Bhavani Narayanaswamy explained that the camera would allow researchers to delve deeper into the wonders of the ocean and also get new insights previously explored sites, as well as discovering uncharted ones.

She added: “There are so many possibilities with this camera. The depth it can reach will allow us to survey large parts of the seabed to assess, for example, the extent of plastic pollution at those depths.”

During its deployment on the Black Sea MAP expedition, the camera was able to capture images of plastic bags and fishing gear on Roman wrecks as deep as two kilometres.

SAMS filmmaker Andy Crabb took delivery of the camera and said: “This amazing piece of filmmaking equipment will allow SAMS to explore the deep sea in a visual format that has never been accessible to us before.

“I am really excited by the great opportunities this will give us to be able to show the world, in beautiful high resolution film footage, the vital work that we do in the mysterious and fascinating deep sea world.”

Sarah Reed, SAMS Ships' Operations Manager said that the donation of the camera was an exciting addition to SAMS research and outreach capacities. She said: “Being able to make full use of the camera system’s amazing deep-sea capabilities really highlights the importance of our development programme for a new SAMS research vessel.”