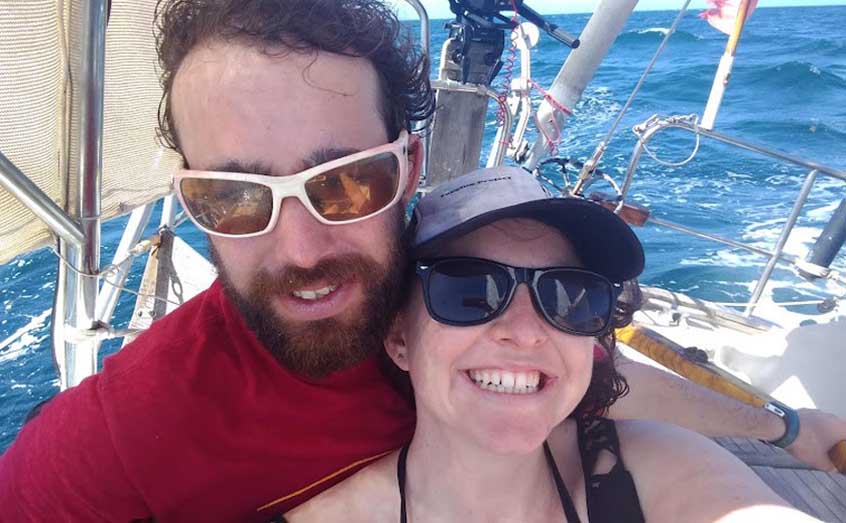 A marine scientist who inherited a yacht from her seafaring mentor is sailing it from the Caribbean to her home in Glencoe while measuring the extent of microplastic pollution, from the deep sea to Scottish rivers.

Saz Reed, from the Scottish Association for Marine Science (SAMS), will sail from Carriacou Island, Grenada from mid-March in a Sadler 34 yacht called Cariad. From Carriacou she will head to the Azores and then up to Scotland, via Ireland, swapping some crew along the way. While the voyage will be a challenge in itself, Saz has taken the opportunity to fit various microplastic monitoring tools to Cariad in an effort to collect data along the way.

The yacht was left to her by the late Tony Meakin, a friend of her father who taught her to sail and helped inspire her love of the ocean.

She said: “My dad was friends with Tony for years and when I was about seven they bought a yacht together so they could build towards their Royal Yachting Association instructor's ticket. Tony decided to go sailing around the world, so bought the yacht outright, but I did a lot of sailing with him on Cariad before he settled in the Caribbean.

“I think those early years of sailing and adventures at sea really forged my love of the ocean. Tony died two years ago and I was shocked to find out that he had left me Cariad in his will.”

Saz hails from Wales, where the word ‘Cariad’ is used as a term of affection.

Having delayed the transatlantic voyage for two years because of the Covid-19 pandemic, Saz and her partner Al Docherty will refit the yacht in Carriacou before sailing it back to Scotland from mid-March to mid-May. Saz will leave Scotland for Carriacou on Friday, February 18.

The marine environment campaigning group Weswimwild has donated the sampling tools required to collect microplastic samples during the voyage. Microplastics are man-made plastic particles and fibres less than five millimetres in size. Marine scientists are investigating the extent of microplastics in the ocean environment and how they may be affecting the food web, as small creatures can feed on these particles.

“I can't go across the Atlantic without measuring something scientific,” says Saz. “Fortunately, I sampled microplastics in the River Coe for Weswimwild last year, so by bringing Cariad back from the Caribbean to Glencoe we are going from sea to source. Saz will also be noting down sightings of marine debris and any marine mammals she encounters on her way.

“The data will hopefully help us build a picture about the extent of microplastic pollution and allow us to examine the interactions between our coastal rivers and the open sea,” she said.

Meanwhile, Saz has also been working on a citizen science project with the Scottish Coastal Rowing Association project to sample microplastics in Scottish waters. This project was supported by Year of Coasts and Waters 2020/21, Event Scotland, the Field Studies Council in Millport, High Water Sails and Nature Scot.

The association’s RowAround Scotland event saw the 70 member clubs row in a relay around the Scottish coastline. Most of the clubs towed a microplastics trawl to sample the waters in their local area. The trawl rig was constructed especially for RowAround Scotland 2020/21 by the Field Studies Council in Millport, Cumbrae.

Saz is now analysing these samples to assess microplastic abundance in waterways around the coast of Scotland, as there are too few research publications on the topic. The country’s coastal waters are important breeding and foraging areas for a wide range of marine species and scientists are keen to learn more about microplastic distribution in the waters around Scotland.

You can follow Saz’s transatlantic voyage at the following link: https://forecast.predictwind.com/tracking/display/SV_Cariad/