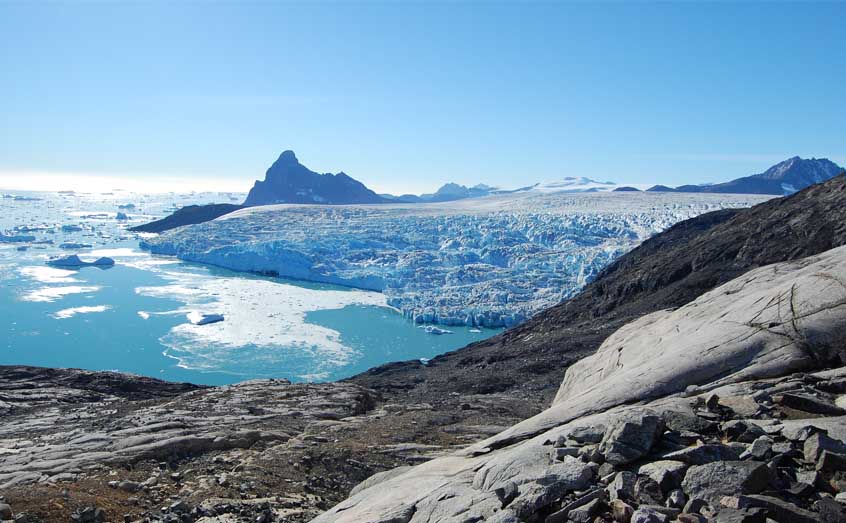 Greenland’s glaciers are melting at an increasing rate

Scottish scientists have shown how giant waves below the surface of the Atlantic Ocean are contributing to the increasing melt rate on the Greenland ice sheet, a major source of rising sea levels.

Rising global temperatures have increased the rate of ice melt in Greenland, making it the second largest contributor to global sea level rise.

Now scientists at the Scottish Association for Marine Science (SAMS) in Oban have shown how 140-metre subsea waves, known as coastally trapped internal waves, are pushing warm water up into the Greenland fjords, melting the ice below the water in winter.

Dr Neil Fraser, an ocean physicist at SAMS has modelled the effects of the internal waves, which are generated by strong winter winds in the North East Atlantic. His work focussed on the Kangerdlugssuaq Fjord, the drain for one of Greenland’s major glaciers and a main source of ice loss in recent decades.

Dr Fraser said: “The major ice melt in Greenland is likely in the summer months but in winter we see the perfect storm scenario of strong winds driving huge internal waves. These waves are pushing warm water into the fjord and towards the glacier, causing melting hundreds of metres below the ocean surface. There is therefore likely to be more wintertime melting than previously assumed.

“We used computer simulations to study these waves, as the extreme conditions make it very difficult to make direct observations during the winter months.”

Models like the one developed by Dr Fraser will help scientists better understand the extent and patterns of ice melt from Greenland, which has seen record levels of ice melt in recent years.

Dr Sam Jones, an oceanographer at SAMS, has already used Dr Fraser’s model to create model animations that accurately depict the movements of the warm water into the fjords.

The findings Wintertime Fjord‐Shelf Interaction and Ice Sheet Melting in Southeast Greenland have been published in the journal JGR-Oceans: https://agupubs.onlinelibrary.wiley.com/doi/full/10.1029/2018JC014435

The work follows on from a field campaign led by Prof Mark Inall of SAMS to the same fjord in summer 2010, which hinted at this type of wave activity.

Ice melt across Greenland is accelerating, and the volume of meltwater running into the ocean has reached unprecedented levels. In 2012, the ice sheet released an estimated 600 gigatonnes of water into the ocean.

Globally, average sea levels have increased by around 3.5 millimetres per year since 2005 and Greenland accounts for nearly 22 per cent of the total annual increase.