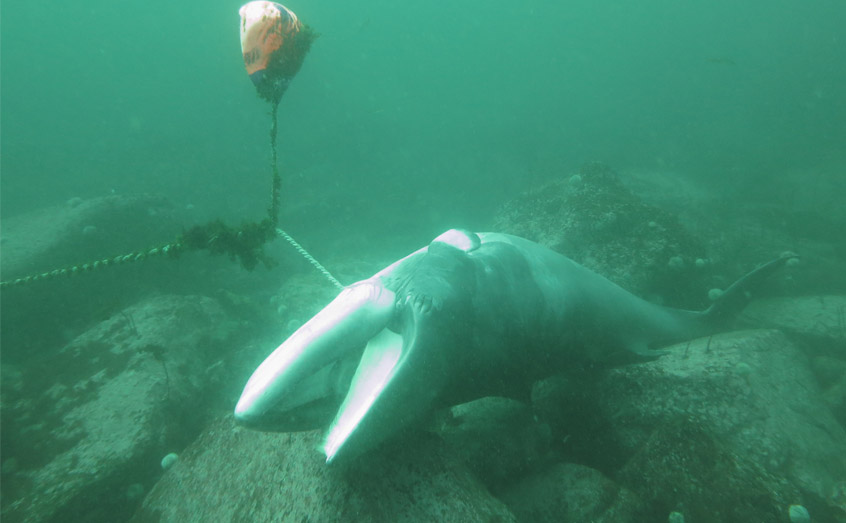 A groundbreaking new study to investigate the nature and extent of whale entanglements in fishing gear around Scotland has identified potential solutions to avoid and reduce such entanglements in the future.

Whales and other marine animals can become entangled in fishing equipment, including the ropes linking creels (also known as pots), which are set around Scotland’s coasts to catch prawns, crabs and lobsters. If whales become entangled they often cannot escape, which can lead to injury and even death. Entanglement is known to be the largest identified cause of death due to human activity for minke and humpback whales in Scottish waters. However, the extent of the issue was not previously well understood.

The Scottish Entanglement Alliance (SEA) brought together government, academia, NGOs and the fishing industry. During the project, commercial creel fishermen from all around the Scottish coast were interviewed and their contribution allowed the researchers to better understand the nature and extent of entanglements in Scotland’s waters. The findings have been published in the journal Endangered Species Research (https://doi.org/10.3354/esr01214). The study estimated that in Scottish waters approximately six humpback whales and 30 minke whales become entangled in creel fishing ropes each year. The collaborative project also identified possible ways to address the problem.

Other marine species such as basking sharks and dolphins were also recorded to have been entangled. Not all entanglements are fatal. However even those entanglements which are not fatal can potentially pose a serious welfare problem.

Russell Leaper, from the International Fund for Animal Welfare, lead author on paper, said: “There is now a legal obligation in Scotland for fishers to report entanglements, which will improve our understanding of the issue. Our current understanding of the extent of entanglements in Scottish waters only became apparent through this study and the valuable contribution made by the fishermen who participated. This collaborative approach means that we now understand so much more about how entanglements occur, which has led us to be able to develop strategies for how to reduce entanglements in the future. There are many cases globally where the problem of marine animals becoming accidentally caught in fishing gear is very hard to solve. But here in Scotland, we can see a way forward, and the key to our success is working together with fishers.”

As well as the number of entanglements taking place, the study also showed that a high proportion of entangled whales had become caught in the groundline, the rope that links creels together on the seabed. As groundline is usually made from rope which floats, it can form arches in the water between creels in which basking sharks or whales can get caught by their mouths, flippers or tails.

This key finding from the study has led to a possible way forward in addressing this problem. If the groundline is made of rope which sinks rather than floats, it will lie on the seabed, and will not pose an entanglement risk. This has shown the way for a new plan to trial sinking groundlines in the Scottish fishing industry.

Bally Philp from the Scottish Creel Fisherman’s Federation (SCFF), a SEA partner, said: “It’s great to see Scotland’s fishermen are at the forefront of understanding and addressing the issue of marine animal entanglement and we hope to continue the collaborative approach in partnership with government, NGOs and researchers. We really want to trial solutions, and look forward to the next stage in this work.”

Susannah Calderan, a research fellow at the Scottish Association for Marine Science (SAMS) in Oban and report co-author, said: “Whale and Dolphin Conservation (WDC) have now received funding from the Scottish Government’s Nature Restoration Fund, managed by NatureScot, to facilitate trials of sinking groundline in Scottish creel fisheries, and understand how it might be implemented in a way that’s practical for fishers and beneficial for the marine environment. This wouldn’t be possible without different organisations including the creel fishing industry working together, and I’m optimistic that we can progress solutions in this fishery which otherwise has a relatively low environmental impact.”

The Scottish Entanglement Alliance was led by NatureScot, coordinated by Ellie MacLennan and supported by partners, the Scottish Creel Fishermen’s Federation, the Scottish Marine Animal Stranding Scheme, British Divers Marine Life Rescue, Whale and Dolphin Conservation, and the Hebridean Whale and Dolphin Trust. It was funded by the European Maritime and Fisheries Fund.