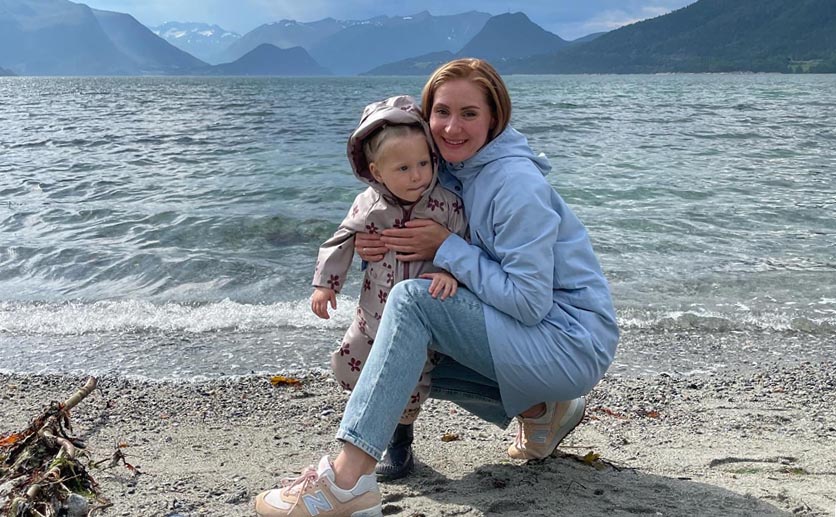 Yuliia Buhlak, pictured in Norway with her duaghter, Sofia, has reconnected with SAMS to develop a business idea to use discarded fish skins to make leather fashion accessories.

The creator of the online business portal Aquaculture Ukraine and the founder of the Ukrainian Aquaculture Society, the mother-of-one is also completing a business course in preparation for starting her own company, FISkin, which uses discarded fish skin to create leather products. Meanwhile, the 32-year-old is undertaking a PhD project to help identify potential expansion in Ukrainian aquaculture and is growing lavender at commercial scale on recently acquired land.

Then, on February 24, everything stops. Two days before she is due to complete her business course, her entrepreneurial ambitions are instantly replaced by a need to survive as Russian forces invade her home country.

For the next month, Yuliia and her three-year-old daughter, Sofia, are effectively confined to their flat and community shelters in Kyiv while her husband, Ievgen, contributes to the war effort. Air raid sirens and explosions are a constant soundtrack, as sleep becomes impossible. The young family lives off savings in the hope that the next day will bring peace.

“Everyone said to run away to Europe, but it was not so easy,” Yuliia recalls, speaking from Norway, where she now has refugee status. “I had a daughter to look after and, although I had a car, the queues to leave Kyiv were huge. You could run out of petrol and the situation was changing so quickly that you could be driving into a battleground without knowing. We didn’t know how long the war would last.

“Every day was the same. We lived in a multi-story block of apartments and would go down to the shelter every time we heard the air raid siren, which could sound eight to twelve times a day, often during the night.

“The worst part was lying down each night and not being able to sleep. Sleeping with one eye open as the bombs fell and thinking that if a bomb hits a certain side of the room: “Can the glass from the window hit my child where she is sleeping? Is there a way I can lie down to cover her?”

The atrocities in the Ukrainian town of Bucha, where bodies of civilians were left strewn in the streets, mark the turning point for Yuliia, who decided escape was the only option left. “I didn’t expect Russians to be capable of that,” she said. “I knew then that when the chance came, we had to leave.”

With men unable to leave the country, she and Sofia left Ievgen in Kyiv and travelled to Kiel, Germany, with a friend, Lena, and her young daughter.

Their destination was a deliberate choice. During the desperate first month of war, Yuliia received the most surprising of emails: an offer from Germany to translate online content for an aquaculture course. It is not the job of her dreams but in that moment, it was a lifeline. The family had some much-needed income and for Yulia, it was a sense of purpose beyond day-to-day survival.

Little did she know, it was also a platform from which she could start to rebuild her career in aquaculture. Four years after finishing her studies at SAMS, a partner of UHI, where she gained a Joint Master’s Degree in Aquaculture, Environment and Society (ACES) https://www.emm-aces.org/, Yuliia has now reconnected with the Oban institute. Working with SAMS scientist Dr Adam Hughes, she will develop her FISkin products duing a three-month paid internship through the EIT Food RIS scheme, an EU-funded programme involving SAMS, which aims to overcome European food system challenges.

Yuliia will work remotely, looking at public perceptions of fish skin discards from processing plants and restaurants being used as an attractive and surprisingly durable source of leather for high fashion accessories such as watch straps and belts. Fish is a more sustainable resource than the conventional cattle leather, because fish farming produces lower emissions compared to cattle farms.

“I don’t think I will be able to travel to Scotland, but I spent six months there during my studies and I loved the place and the people. I’m so happy to be working with SAMS again. Getting the internship is such a relief, as it will allow me to restart work on my FISkin project.”

Dr Hughes said: “Yuliia was an exceptional student at SAMS and since she completed our international Master’s in aquaculture, I have followed her career with great interest. When I first heard about her situation in Ukraine following the invasion I was deeply concerned.

“When the opportunity came to work with Yuliia again, and to help support her as she restarts her career and develops her business came up through this scholarship scheme, it  was brilliant to be able to do something positive. Fish skin leather is very beautiful and really sustainable, so I am sure Yuliia’s business will be a huge success.

As for the future, Yuliia has hopes to return to Ukraine to rebuild her aquaculture dream. “I was such a happy and busy person before the war,” she says. “I like doing many things; it motivates me.”

Back home, in between supporting troops on the front line, husband Ievgen tends to the lavender crop, which has so far avoided damage and remains a site of hope for the family.

Through sheer ambition and determination, there remains the seeds of a prosperous post-war future for the Buhlak family of Kyiv.