Photophobia may help zooplankton to adapt 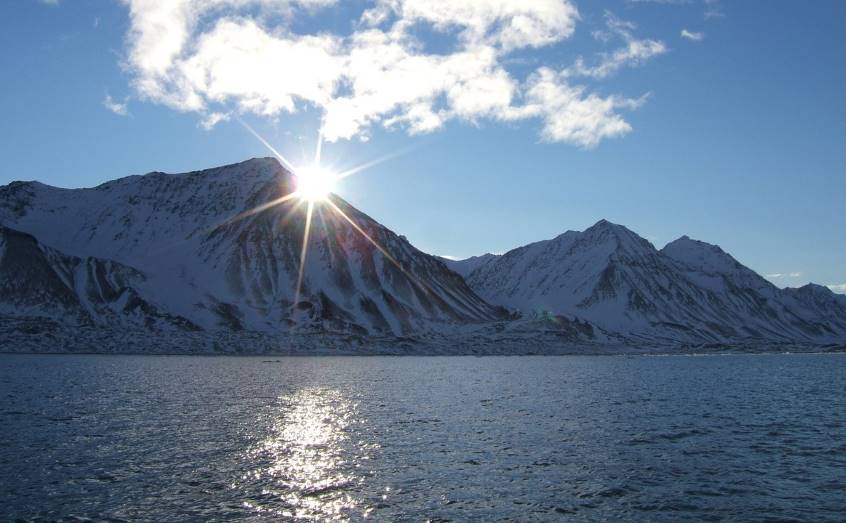 The sun rises over Kongsfjorden, Svalbard, where much of the research took place

An aversion to light has long been a survival tactic used by the smallest creatures in our ocean, but scientists have discovered this photophobia may already be protecting them against impacts of environmental changes in the Arctic.

Known as zooplankton, these microscopic creatures swim hundreds of metres every day, up and down the water column in response to the changing light. By staying deep below the surface during the daytime, they can avoid predators. Only during the relative safety of night can they come nearer the surface to feed on tiny marine plants known as phytoplankton.

The underwater light in the Arctic is changing in various ways. As sea ice in the Arctic melts at an increasing rate because of climate change, more light penetrates the water. Added to an increase in light from infrastructure and shipping, these changes are potentially making zooplankton – a crucial part of the ocean food web – more vulnerable to predators.

But an international group of Arctic scientists led by the Scottish Association for Marine Science (SAMS) in Oban and the University of Strathclyde has discovered that zooplankton have an established threshold of light tolerance, regardless of the time of day, season or year, suggesting they are capable of adapting to dramatic changes in light. As the depth at which this light level is found moves up and down the water column between day and night, and across seasons, zooplankton are seen to remain below it, avoiding the shallow depths where it is light.

Lead author of the report Dr Laura Hobbs said: “As the Arctic lightscape changes, and more light enters the ocean, it would be reasonable to think that fish and other predators would become more proficient at feeding on zooplankton.

“However, we’ve seen that zooplankton might already be adapted to these changes by swimming deeper to avoid high light levels. More light also means larger blooms of phytoplankton, so there’s potentially more food available to them. Whether they are able to reach that food, given the higher levels of light at shallower depths, is another question.”

Zooplankton sit in the centre of the Arctic marine food web. They are responsible for transferring energy from phytoplankton to larger species like fish, seabirds, and whales. Their vertical migrations in the water are also important: as they eat at the surface but excrete at depth, they play a vital part in removing carbon from the surface layers and taking it to deeper waters.

This research contributes to a suite of UK and Norwegian led projects, including those funded by the UK Natural Environment Research Council through the Changing Arctic Ocean programme and the Research Council of Norway. The data used in this research were collected by a long term collaboration between researchers at SAMS, UiT The Arctic University of Norway in Tromsø, and the University Centre in Svalbard.

This research to find out more about the Arctic ecosystem during the dark polar winter was subject of an award-winning film Into the Dark, which had it UK premiere this month as part of Glasgow Science Centre’s Curious About Our Planet event. Into The Dark Movie - Curious about Glasgow Science Centre