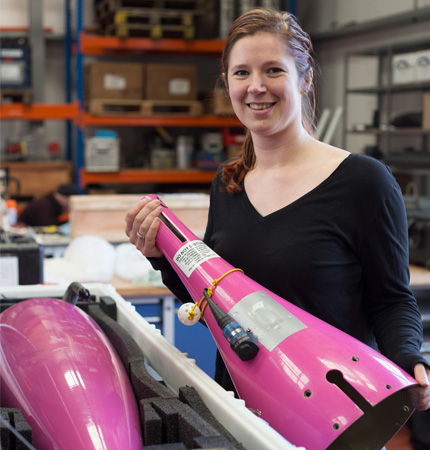 A physical oceanographer working with gliders, drifters, AUVs and RPAs.

My work focusses on vertical and horizontal mixing and exchanges within shelf sea and shelf edge systems. I am particularly interested in the impact of these exchanges on nutrient pathways and the ecological response.

My research focusses on the physical oceanography of the shelf seas, particularly shelf edge exchange and both horizontal and vertical mixing.

I use robotic platforms such as gliders for high resolution sustained observations to study the seasonality of shelf processes. This seasonality has traditionally been hard to observe due to the difficulties involved in collecting data during winter. These platforms not only allow us to collect data during difficult times of the year but also in extreme and remote environments. I am interested in the use of gliders and AUVs on the Arctic shelves for sustained observations of the water column near to the sea ice edge throughout the seasons.

I think it is important that these observational oceanography studies are not seen in isolation and consequently I am interested in the links with nutrient dynamics and the use of the observations in model development.

Fluxes Across Sloping Topography in the North East Atlantic (FASTNEt): Funded by NERC. 2012-16

2012 PhD 'Linking surface fluctuations of terrestrial ice masses to variability within the mixed layer of the surrounding oceans'. The University of Aberdeen

2008 BSc (Hons) Meteorology and Oceanography. The University of East Anglia