The Arctic Ocean is undergoing unprecedented change and a number of major international programmes have been initiated to understand the environmental, economic and geopolitical consequences.

SAMS is at the forefront UK Arctic Ocean research initiatives and leading science activities that exploit novel analytical tools and robotic vehicles to understanding the consequences of climate change. The overall coordination and two (Arctic PRIZE and DIAPOD) of the four main research projects of the £16 M NERC-funded Changing Arctic Oceans Programme (2017-22) are led by SAMS researchers.

Specifically, SAMS aims to identify the key physical processes that control biological activity in the Atlantic sector of the Arctic and develop predictive modelling tools to inform on future scenarios.

Historically difficult to access, the Arctic Ocean was traditionally viewed as a remote, pristine and barren environment. Recent changes in climate, however, make the Arctic the fastest warming region of the globe.  High latitude ecosystems, which include Arctic indigenous peoples, are under pressure from changing climate and increasing outside demand for natural resources. Current predictions foresee the entire Arctic Ocean to become ice-free in the summer sometime in the coming decades with impacts for marine and terrestrial systems far beyond the Arctic region that will affect our environmental, economic, social and political landscapes.

There are therefore many reasons to study the Arctic Ocean:

The aim of our Arctic seas research is to promote and facilitate Arctic marine science research, to provide national leadership in Arctic research and to contribute to a fuller understanding of the nature of Arctic marine systems.

We undertake research exploring all aspects of the Arctic marine environment.

We study the oceanic, atmospheric, sea-ice and glacial processes that drive variability in the high latitude oceans over a broad range of spatial and temporal scales as well as the interactions between polar ocean and atmosphere, and the Arctic Ocean and lower latitudes. Our research also explores the interface between disciplines, with research projects in biological systems and marine geology/geochemistry.

As the high latitude ice/ocean/atmosphere system is highly coupled and traditionally difficult to access, we have a history of strong international and cross-disciplinary collaborative links and have developed expertise using data from a broad range of research platforms, including ships, autonomous underwater vehicles, drifting platforms and satellites.

Copepod species of the genus Calanus are rice grain-sized crustaceans, distant relatives of crabs and lobsters, that occur throughout the Arctic Ocean consuming enormous quantities of microscopic algae (phytoplankton). These tiny animals represent the primary food source for many Arctic fish, seabirds and whales.

During early spring they gorge on extensive seasonal blooms of diatoms, fat-rich phytoplankton that proliferate both beneath the sea ice and in the open ocean. This allows Calanus to rapidly obtain sufficient fat to survive during the many months of food scarcity during the Arctic winter. Diatoms also produce one of the main marine omega-3 polyunsaturated fatty acids that Calanus require to successfully survive and reproduce in the frozen Arctic waters.

Calanus seasonally migrate into deeper waters to save energy and reduce their losses to predation in an overwintering process called diapause that is fuelled entirely by carbon-rich fat (lipids). This vertical 'lipid pump' transfers vast quantities of carbon into the ocean's interior and ultimately represents the draw-down of atmospheric carbon dioxide, an important process within the global carbon cycle.

Continued global warming throughout the 21st century is expected to exert a strong influence on the timing, magnitude and spatial distribution of diatom productivity in the Arctic Ocean. Little is known about how Calanus will respond to these changes, making it difficult to understand how the wider Arctic ecosystem and its biogeochemistry will be affected by climate change. (For more information contact Professor David Pond.)

Calanus copepods are close to the bottom of the Arctic food chain and therefore represent the primary source of energy for all bigger marine animals. As a consequence this makes them vulnerable to predators. In order to reduce the risk of becoming a meal, copepods and other zooplankton, undertake daily (or diel) vertical migrations (DVM).

Constituting one of the biggest, by biomass, daily migrations on the planet, DVM involves migrating into the ocean depths during the daytime to hide from visual predators and up to the surface at night to feed on microscopic algae or phytoplankton. This behaviour has been well studied since it is important in food-web structure and in moving carbon from the surface oceans to the sea bed, a natural form of "carbon capture".

Until recently it was thought that at high latitudes, such as in the Arctic, DVM would cease during the winter, when the sun sinks permanently below the horizon for many months during the polar night. Surprisingly, however, it appears that this is not the case since the influence of sunlight appears to be over-ridden by the influence of moonlight. Research has shown that during monthly full moon periods, zooplankton migrate away from the surface, a behaviour which may be likened to hiding from mythical werewolves, in this case probably other predatory zooplankton and polar cod.  The behaviour is remarkable in that the migration is phased to the cycle of the lunar-day which is near 25 hours, which, on our 24 hour cycle dominated planet, is probably unique.  It is now known that during the winter, such lunar vertical migration (or LVM) occurs across the entire Arctic Ocean from the fjords of Svalbard to the north pole. Ultimately this provides a better understanding of ecosystem change with future ice-retreat and its consequences to copepod dynamics. (For more information, please contact Dr Kim Last.)

We are also interested in the diversity, composition and structure of the deep water fauna living in polar seas (for more info contact Dr Bhavani Narayanaswamy).

Dr Thomas Brown has devised a method to measure how much of a species’ diet is derived from sea ice. Using chemical biomarkers, e.g. fatty acids, sterols and highly branched isoprenoids, he investigates how the changing sea ice cover affects various populations of animals.

The Arctic region is mostly ocean realm. Mapping the shape of these coastal areas and ocean basins is key to understanding processes such as glacial retreat and ocean circulation. Working with vessel-based sonar systems and more recently from autonomous underwater vehicles (AUVs) SAMS have been mapping the seabed of polar regions for many years.

Dr John Howe first surveyed the seafloor of the Kongsfjord-Krossfjord region in 2002 and has since been involved in numerous mapping and sampling campaigns around Svalbard. The use of AUVs has provided remote access to previously hazardous and unexplored regions such as the glacier fronts of Kronebreen and Kongsbreen, working in partnership with the Norwegian Polar Institute and UNIS.

SAMS has a long history of adapting and developing technologies to make observations in remote and hostile environments such as the Arctic.

One of these - an array called Simba that takes vertical temperature measurements to establish the thickness of sea ice - has been developed into a commercial product built and sold by our subsidiary company SRSL.

The Scottish Marine Robotics Facility has been amending and deploying gliders, AUVs, landers and remotely piloted aircraft to study the Arctic environment in recent years.

Within the UK, our scientists have unrivalled access to Arctic infrastructure and logistics.  We study the Arctic from numerous platforms (ships, moorings, submarines, ice camps, aircraft etc) to observe directly any changes that are occurring in the Arctic.  We have established strong links with the circumpolar nations of Russia, Korea, USA, Canada, Norway and Greenland. This logistical base supports our state-of-the-art observational, experimental and modelling expertise.

SAMS operates a purpose designed ice laboratory for experimental work on sea ice properties and processes. This has been used to test and develop new instrumentation and to investigate techniques for detecting oil under ice. The laboratory can be operated down to -25oC and is highly flexible to project needs.

Since 2002 we maintain an oceanographic observatory in the shelf waters off north west Svalbard.

A suite of instruments is permanently deployed there to monitor the physical, chemical, biological and geochemical environment. Similar observatories are now in place at two other location in the north and west of Svalbard.

Our active technology team has been developing a wide range of cutting-edge autonomous environmental monitoring instruments used to study changes in polar environments with a particular focus on sea ice.The instruments make significant use of satellite data telemetry and GPS.  Major advances have been made in data transfer technologies, instrument longevity, autonomy and low cost systems.

Our scientists have access to a range of research platforms including the international fleet of polar research vessels and associated ROV technologies.

We design and manufacture novel autonomous ice mass balance buoys (IMBs) for monitoring sea-ice cover in the Arctic/Antarctic. This measurement is achieved by deployment of a network of our reliable and affordable autonomous SIMB units (Sea Ice Mass Balance. 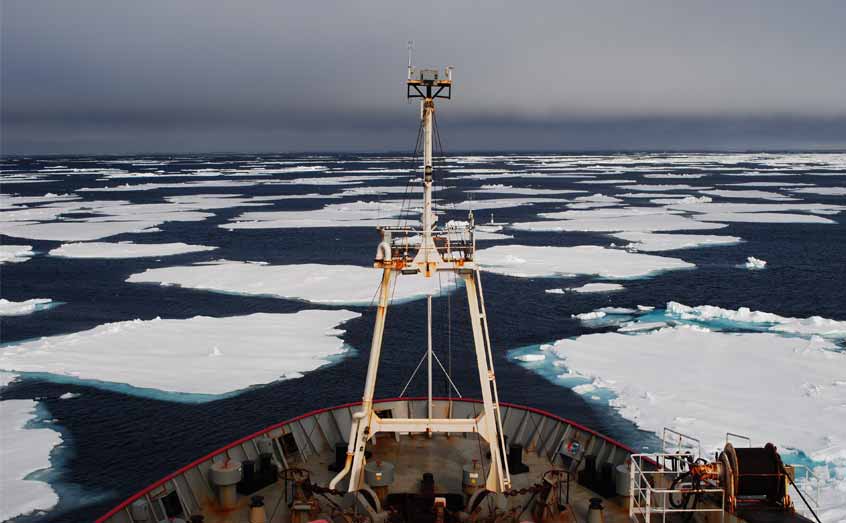 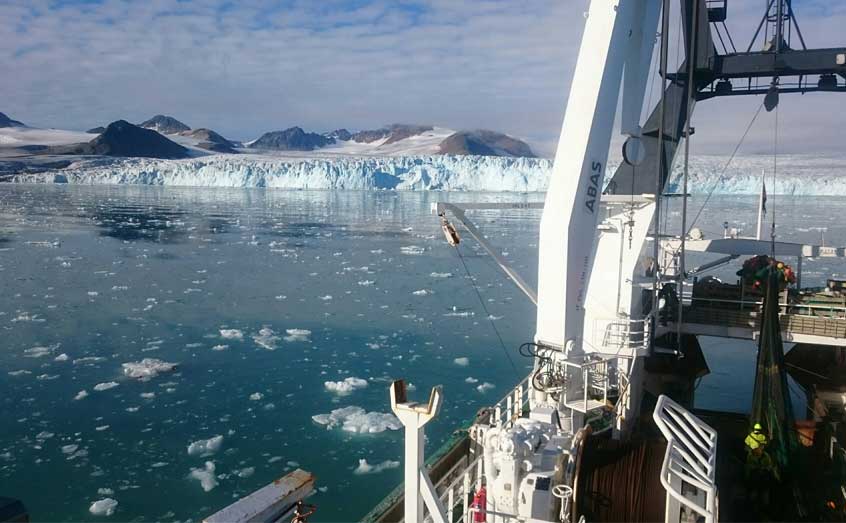 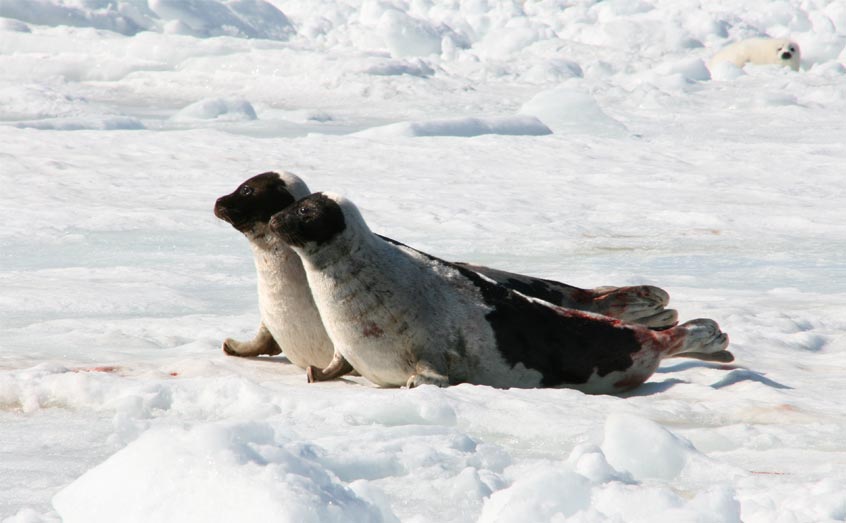 Can we detect changes in the Arctic ecosystem? 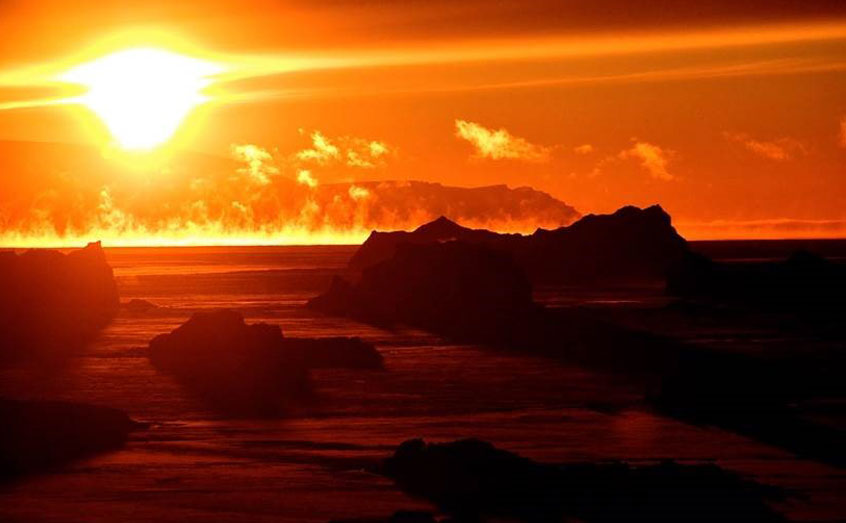 ... understanding the impact of a changing Arctic on northern hemisphere weather and climate 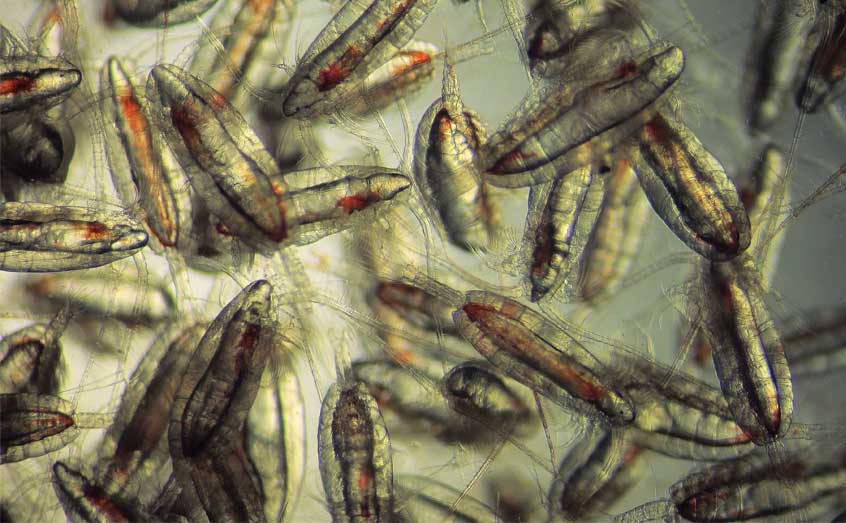 ... investigating how Arctic zooplankton like Calanus will be affected by climate change 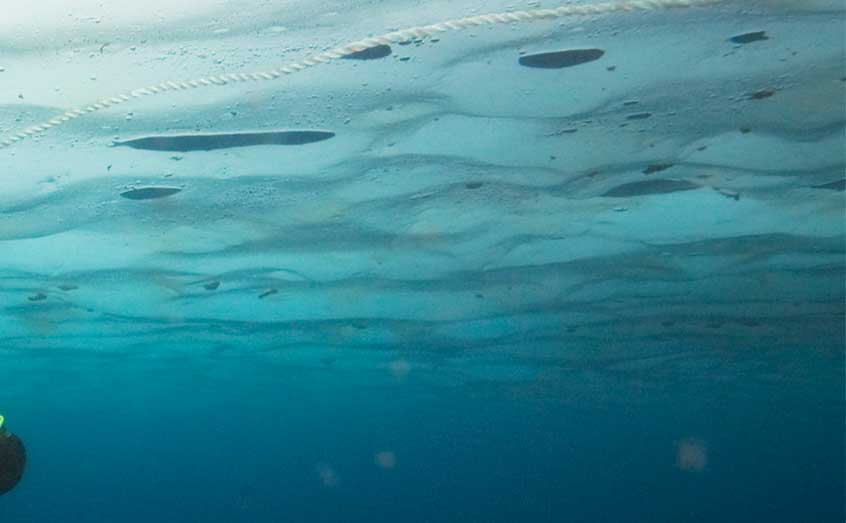 ... studying the combined effect of changes in light, acidification and species composition on Arctic algal blooms in sea ice and water. 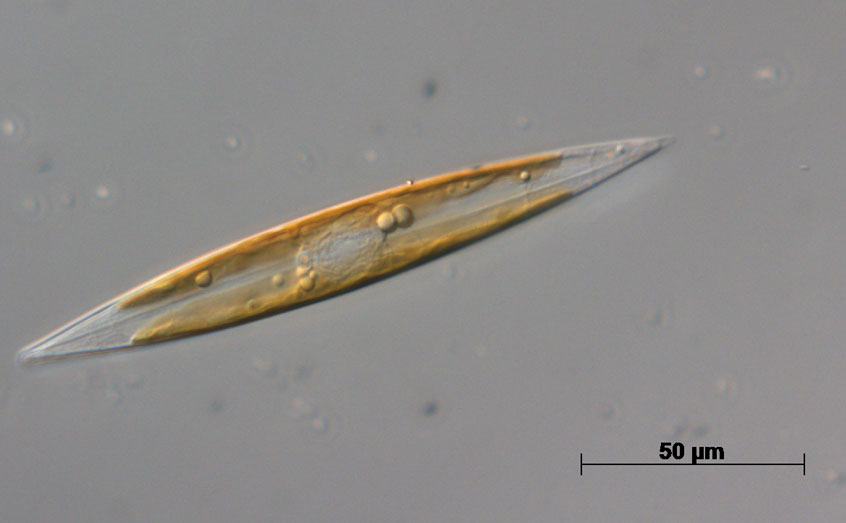 ...determining how highly-branched isoprenoid lipids are biosynthesized in ice 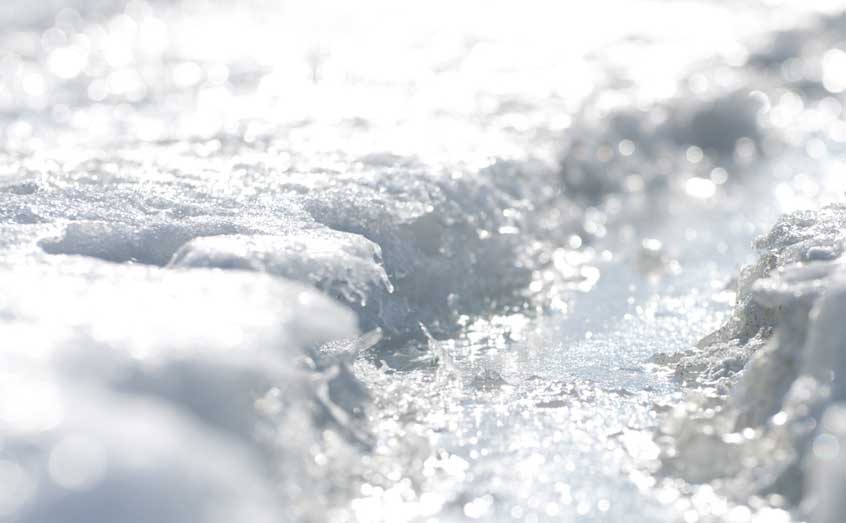 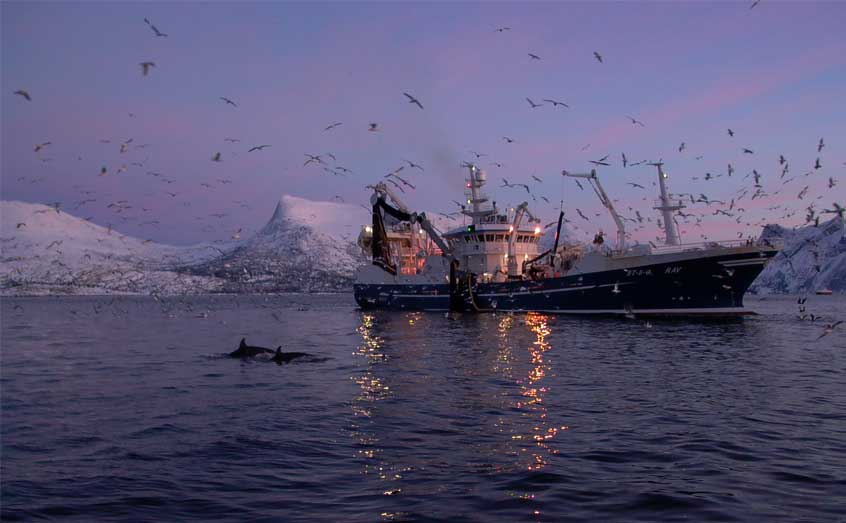 ...informing the development of sustainable Arctic fisheries by quantifying the sources of organic carbon consumed by deep water fish. 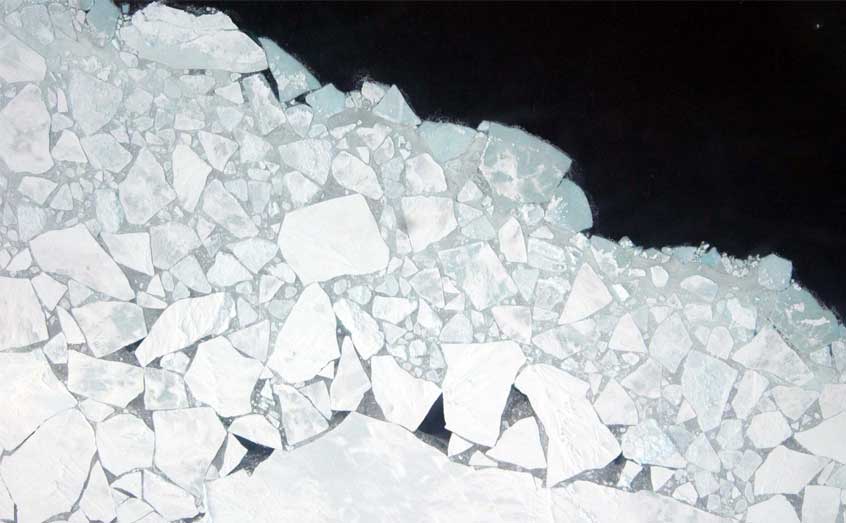 ... quantifying the impact of more marginal ice zone on Arctic climate, and exploring the processes responsible for loss of Arctic sea ice