How is global warming affecting the Arctic? 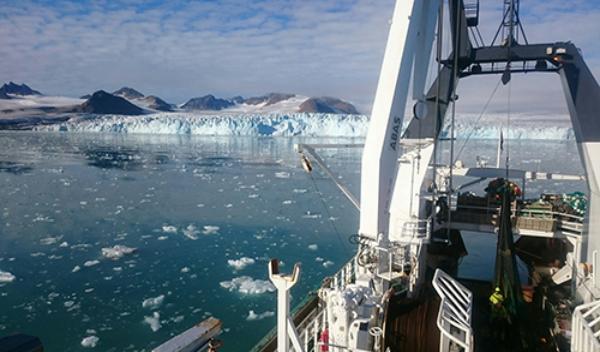 Lillehookbreen glacier can be seen from on board the research vessel Helmer Hanssen north-west of Spitsbergen, Svalbard

Major UK Arctic research projects that will help us better understand and predict the rapid environmental changes in the polar region have been awarded to the Scottish Association for Marine Science (SAMS).

The Oban-based institute is leading two of the four main Arctic projects funded by the Natural Environment Research Council (NERC) through its £10m Changing Arctic Ocean programme and has involvement in the other two, led by the universities of Liverpool and Leeds.

The Arctic region has seen the most dramatic changes in climate over the past few decades, with ice melting at a quicker rate each year because of rapid warming. While the daily average global temperature rose by 0.55 degrees Celsius from 1979 – 2000, the temperature in the Arctic rose by 6.42 degrees Celsius for the same period.

The average Arctic sea ice cover for November 2016 set a record low, leading to suggestions that sea ice cover could be at a tipping point, from which that the region may not recover.

The two SAMS projects, Arctic PRIZE and DIAPOD aim to help us understand these changes in the Arctic and how they will affect the climate, ocean properties, marine life and food stocks across the northern hemisphere. They will benefit from SAMS’ expertise in marine biology, physical oceanography and marine robotics.

Arctic PRIZE is led by Dr Finlo Cottier, who holds an Adjunct Professorship at project partner University of Tromsø, the Arctic university of Norway. The project will address questions over how changes in sea ice and ocean properties will affect the large-scale ecosystem of the Arctic Ocean throughout the year and, crucially, during the relatively unexplored dark polar winter. SAMS robotics from the NERC-funded Scottish Marine Robotics Facility will be used to measure oceanographic data and take samples in this harsh winter environment and in places too dangerous for researchers to access. The project will then produce predictive tools to assess how the Arctic ecosystems will respond to a reducing sea ice cover. SAMS’ long-term collaborators in Norwegian institutes are heavily involved in Arctic PRIZE.

DIAPOD, led by Professor David Pond, will examine the role of the Calanus, a small shrimp like animal that is a crucial element of the marine food web. Current predictions suggest that a warming Arctic will reduce their numbers. Whales, seals and commercially-important fish rely on Calanus as a high-energy food source.

SAMS Director Prof Nicholas Owens said: “SAMS is synonymous with research in the Arctic, a region that is giving us a window into the pace and effects of climate change.
“In order to prepare for potential changes in our weather, our food stocks and our marine habitats, we must first understand how global warming is affecting our oceans now.”

NERC Chief Executive, Professor Duncan Wingham, said: “This £10m investment demonstrates NERC’s commitment to high-quality research in the Arctic region, building understanding of how this complex marine environment is changing in response to global climate change. Profound and fast-paced change in marine ecosystems in the Northern Hemisphere has implications for the UK and internationally. Today’s research into the impacts of stressors on Arctic marine ecosystems including diminishing sea ice, ocean acidification and pollutants will help scientists understand and predict future environmental change. It is vital to understand our changing Arctic Ocean, both to help manage environmental change globally and to inform appropriate decision-making around the use of our natural resources.”

For a short launch video on the projects, see: https://youtu.be/wNyCtZWyGTo