Our robots on scientific missions...

We develop, adapt, deploy and operate flying and diving robots

The main reason that we still know more about the surface of the moon than most of our marine environment is because of the difficulty, danger and expense of gathering ocean data especially from extreme marine environments. But modern technology increasingly allows us to make these important in situ observations - often from afar.

These new technologies drive marine science forward and the new knowledge enables people to plan how we interact with the marine realm more sustainably.

Our scientific team uses robotics to study our environment. The facility is science led and has the expertise to design scientific missions and interpret data, providing a complete and distinctive package of marine observations.

The facility has an exceptional range of capabilities that support academic, regulatory and commercial projects. From aerial mapping to surface fluxes and the properties of deep water, the Scottish Marine Robotics Facility has technologies that span the atmosphere, ocean and ice.

The North Atlantic Glider Base 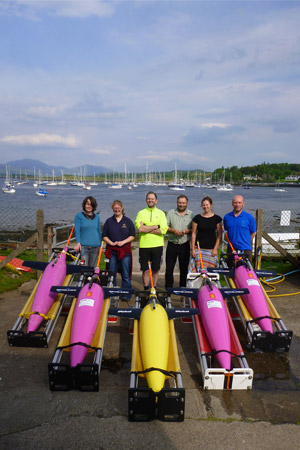 The North Atlantic Glider Base welcomes scientists from all over the world to bring their own gliders for deep-water testing, launch and recovery for North Atlantic missions, and for advice on operations and on real-time data delivery. We can also provide access to our own seven Seagliders and/or other robots such as our AUVs for development and trials of new sensors.

The NAGB is a delivery partner of the Marine Autonomous Robotic Systems at the National Oceanography Centre and is supported by NERC National Capability funding. As part of our National Capability we offer the above on a free-at-the-point-of-use basis to NERC applicants proposing to use the National MARS facility housed at NOC. To non-NERC users we offer the above on an appropriately costed basis.

SAMS research projects that are/were supported by gliders include...

Gliders are small, energy-efficient robots (they’d fit in a bath - just!) that can roam the oceans for up to seven months at a time making continuous measurements of temperature, salinity and other properties. Whenever they surface they send all collected data to their remote pilot via an Iridium satellite link and receive instructions for their next underwater mission. Gliders have short wings – that’s why they are called gliders – and can fly from the surface of the ocean down to as deep as 1 km, and then back up again.

How do they know where to go?

As a glider sinks, a weight inside is moved towards the nose of the glider so that it tilts downward, and so the glider glides forwards. To make the glider rise back up, the same weight is moved backwards towards the tail, so that the nose tilts upwards and the glider continues to move forward. The wings then make it 'fly.'

How fast are gliders?

Very SLOW! You can walk about six times faster than a glider.

Why do they sink and then rise again?

What can gliders measure?

Can gliders replace observations collected by scientists from ships?

Because gliders are limited in depth range, sensor availability and power supply they supplement rather than replace ship-borne observations. 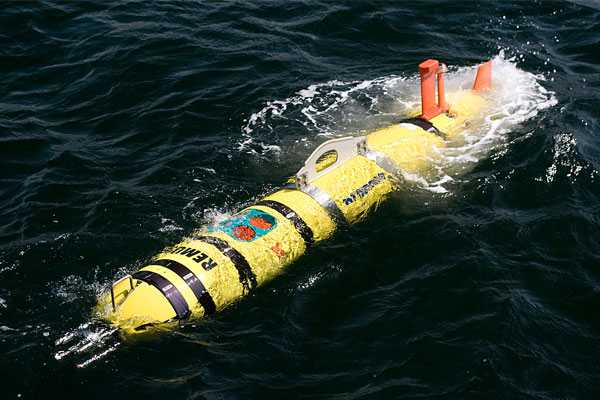 AUVs travel independently through sea water along pre-programmed pathways while measuring horizontal variations in water properties. In 2009 we purchased our first REMUS AUV.

Rebus is a positively buoyant, 2m long, propeller-driven vehicle used for short-duration (max 10 hours), intensive surveys of the ocean down to 600m over distances of around 70km. The REMUS AUV is designed to measure the amount of small-scale turbulent mixing in the ocean as well as temperature, salinity, water velocity and chlorophyll fluorescence.

Rebus has been on missions around Scotland and the Arctic. 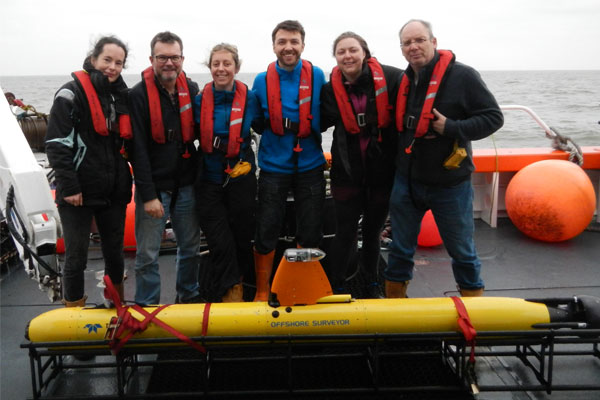 Early in 2015 the Scottish Marine Robotics Facility acquired a Gavia Offsore Surveyor autonomous underwater vehicle 'Freya' (named after the Norse goddess of beauty, love and destiny). SAMS hosts this submarine-like robot on behalf of the Marine Autonomous and Robotics community run by NERC.

Freya is designed to be operated from vessels and can dive to depths of 500 m. The Gavia is used to survey and map the seabed and to collect GeoSwath+ bathymetry, side scan and photo mosaic data.

The Gavia AUV is an autonomous sensor platform that is user-configurable by the addition of one or more sensor, navigation or battery modules using a unique twist lock system.

RPA, previously known as Unmanned Aerial Vehicles (UAV), are aircraft that fly without an on-board pilot. The term can refer to anything from radio controlled helicopters that can fit in the palm of your hand to high altitude, long endurance (HALE) aircraft weighing over 14 tonnes.

A number of recent advances in technology have enabled simple and cheap "electric" RPA. These aircraft use light weight batteries and carrying miniaturised sensors, loggers or cameras. They have found favour with both research groups and hobbyist in part because of their simplicity (and therefore low cost) but also because, if designed with a take-off weight < 20kg (small-RPA), the legislation for legal operation is relatively straightforward to accommodate*.

It is this small-RPA technology that has been adopted by the environmental research community to make measurements that were previously difficult or even impossible. A few that SAMS study are:

To attain RPA capability, SAMS has worked to acquired not only suitable RPA the technology, but has invested in SAMS RPA Flight: the crew and facilities to operate RPA safely, legally. SAMS RPA Flight work with the scientist to plan measurements campaign, whilst engaging with sensor engineers and the CAA to ensure mission success.

* RPA are more than mere radio controlled aircraft. According to CAA regulation, an RPA is still an aeroplane, and must be flown in a manner that can be proven to incur a similar level of risk as piloted aircraft. This means a careful consideration of flying mass (i.e. take off weight), air-space, surface habitation, airframe and control reliability and so forth.  If the flying mass is small (e.g. less than a goose), then its risk to habitation or other aircraft is also small. Add in simple but sensible communication and control protocols and risk is deemed acceptable.

The combination of side-scan sonar and multibeam bathymetry provides a powerful seabed mapping tool. Seabed morphology and surface sediment, bedform and textural information which can inform interpretations of both habitat and physical environmental conditions on the seafloor.

We use a Klein 3000 dual frequency side-scan sonar. The digital side scan generates acoustic images of the seafloor and its reflectivity, revealing such features as areas of coarse or fine-grained sediments, seabed obstacles, bedforms, therefore enabling sediment transport pathways and anthropogenic impacts to be evaluated.

The multibeam bathymetry provides a highly accurate (<5m resolution) map of seabed morphology. Its use on the UK shelf is currently being realised through extensive mapping for benthic habitats, offshore civil engineering and defence projects and can also be used in the interpretation of the extent and impact of past climatic change (e.g. glaciation by mapping moraine and hence palaeo-ice limits) on the seafloor.

Moorings are collections of instruments that are connected to a wire that is often anchored on the sea floor. Our moorings are long-term moorings deployed for years with instruments at various depths. The data is either collected regularly or sent by satellite to the researchers.

We currently have moorings in three different locations:

SAMS has a long history of producing drifting platforms and developing satellite communications and advanced GPS techniques for drifters. We have significant experience not only with various types of telemetery needed for drifter technology but also a pool of expertise in the areas of automated collection, processing and real-time presentation of incoming data.

Present drifter work includes development of a fleet of low-cost semi-expendable tracking buoys to monitor coastal currents. These use mobile phone technology as it is extremely cost effective in terms of hardware and data transfer.

Such drifters have been successfully deployed in the Gulf of Corryvreckan and the Great Race, a turbulent area of sea near Oban which warrants investigation of the substantial system of tidal currents it contains. Contact: Dr Andrew Dale (andrew.dale@sams.ac.uk)

Our Drifting Ears are boat-free, mobile recording systems that include a sound recorder, GPS and power supply packed into a small floating case attached to an underwater microphone. They are used to collect and measure underwater sound in different environments particularly one experiencing rapid tidal flows - for example at candidate sites for deployment of renewable marine energy devices. Contact: Professor Ben Wilson (E: ben.wilson@sams.ac.uk)

The Drifting Porpoise Detector concept uses off-the-shelf passive acoustic detectors attached to coastal drifters to survey rapid tidal flows for harbour porpoise presence and distribution. This allows us to determine how tidal cycles influence how these and other small cetaceans use tidal flow sites – and how this might be impacted by future tidal energy devices. Contact: Dr Steven Benjamins (E: steven.benjamins@sams.ac.uk) More...

Another current area of work is to produce free drifting buoys which can tolerate the freezing conditions of polar oceans and withstand the forces encountered when sea ice is forming or breaking up. Such buoys can monitor both the formation and decay of sea ice. 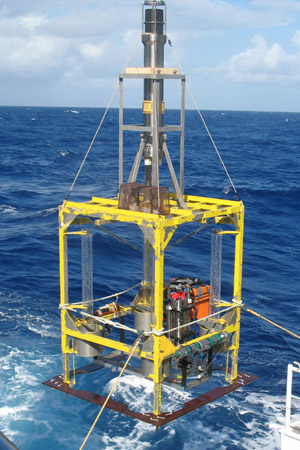 Benthic landers are self-contained platforms designed to work remotely on the seabed, often thousands of metres below the surface. By making measurements in situ at the seafloor instead of bringing samples up to the surface artefacts associated with large pressure and temperature changes can be avoided.

Landers can carry various types of instrument to investigate the seafloor. Each is normally controlled by an onboard computer, which also stores the data recorded by the instruments in situ. Iron ballast makes the otherwise positively buoyant lander sink down to the seabed. On completion of its mission, an acoustic command is sent from the surface to release the ballast and allow the lander to float back up to the surface.

Over the years SAMS has developed scores of different landers for biogeochemical seafloor investigations, including chamber, profiling and eddy landers. We have also developed a range of in situ instruments including novel sensors for the detection and quantification of specific molecules, two-way telemetry data links, high compression slow scan video imagery, ultra-clean platforms for trace metal studies, environmentally controlled benthic chambers, and active control of in situ experiments in near real time.

While an array of our research used lander technology in the past, it is currently a less widely applied technology at SAMS.