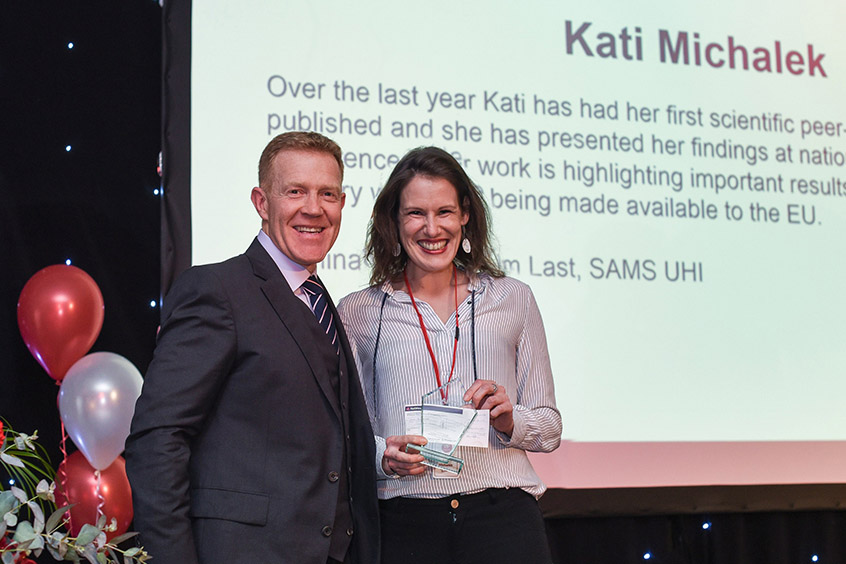 A PhD student from SAMS UHI has been named Higher Education Learner of the Year at the annual Lantra Scotland Land-based and Aquaculture Learner of the Year Awards.
Kati Michalek, aged 32, is currently studying shellfish aquaculture through Marie Curie ITN's prestigious European CACHE programme and has been looking at how shellfish will cope in a changing climate, particularly with increasing ocean acidification.
The awards ceremony, held at the Doubletree by Hilton Dunblane Hydro Hotel on Thursday, March 2, celebrates the achievements of trainees within Scotland’s rural sector and encourages employers to invest in the next generation of rural talent. Kati received her higher education prize from the evening's special guest, BBC Countryfile farmer Adam Henson.
Kati said: “I am honestly touched and surprised to have won the Higher Education Award. The support I have received throughout my time at SAMS UHI, particularly from my director of studies Dr Kim Last, has been truly humbling. It’s a great place to work and I hope I made them proud by winning this award.Thank you to everyone who has helped me along the way.”
Her supervisor Dr Last said:“Kati was selected two years ago from a very large pool of candidates to join a European PhD programme, funded through the prestigious Marie Curie training scheme. Kati grabbed the opportunity with both hands and has worked tirelessly ever since and we are so pleased that this has been recognised at Lantra’s Awards.
"Over the past year Kati has had her first scientific peer reviewed paper published and presented her findings at national and international conferences. Her work is highlighting important results for the shellfish industry which are being made available to the EU and disseminated locally through the Association of Scottish Shellfish Growers."
The overall Learner of the Year title went to Emma Staniforth from Dumfries, who has been studying a Modern Apprenticeship SVQ Level 2 and 3 in General Woodland and Treework with Forest Enterprise Scotland. Runner-up overall was Stirling's Stuart McKinlay, a student at SRUC Oatridge and apprentice fisheries bailiff at Stirling Council Fisheries.

The finalists for the 2017 learner of the year awards were chosen by a judging panel of influential figures from across the land-based and aquaculture sectors. The 2017 judges are: Ray Jones, former Chairman of Scotland Food & Drink, agriculture and rural affairs journalist Erika Hay, Keith Paterson of Forestry Commission Scotland, farmer Keith Redpath, Lisa Connell of The Scottish Salmon Company and Rebecca Dawes of the Scottish Association of Young Farmers Clubs.