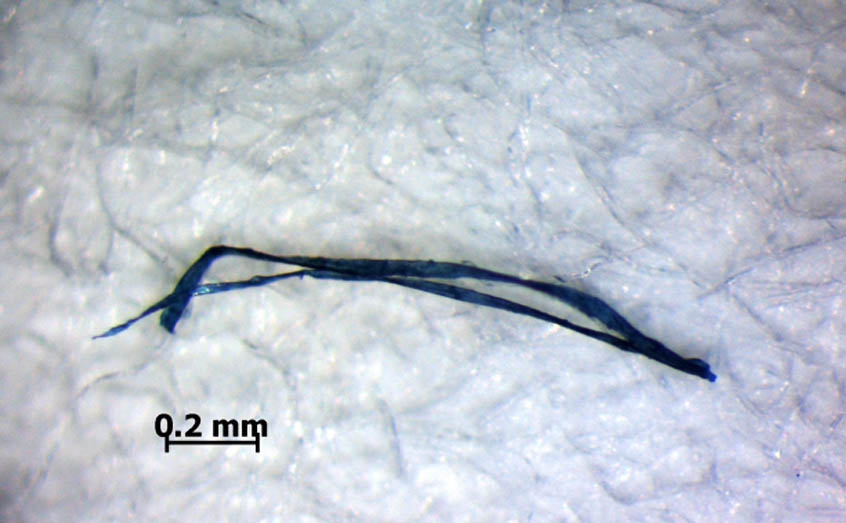 A microscopic trace of polyester taken from a deep sea animal

SAMS researchers have been putting plastic pollution under the microscope following the creation of a microplastics research group.

The impact of these man-made plastics on our marine environment has been high in the public consciousness over the past few years, with the BBC’s successful Blue Planet II series highlighting the issue in its season finale yesterday (December 10).

Around eight million tonnes of plastic enters the ocean every year and traces of plastic have been detected from the coastline all the way down to the Mariana Trench, the deepest part of the ocean.

Marine ecologist Dr Bhavani Narayanaswamy is heading the research group, which currently has three PhD projects running through the University of the Highlands and Islands.

Dr Narayanaswamy said: “It is easy for people to visualise plastic pollution when they see bags, bottles or cigarette lighters but these items all break down to an extent through wave action and sunlight. Beyond that, it is a little bit ‘out of sight, out of mind’, so we need to know more about how these plastics break down and where they end up.”

Student Winnie Courtene Jones has already published evidence of tiny pieces of plastic found in 48 per cent of animals sampled that live more than 2,000m (6,561.8ft) below the surface of the ocean.

She now aims to go back in time, examining samples taken on an annual research cruise from 1976 to the present day. Documenting traces of microplastics within these samples, will help to explain whether the levels of microplastics in the deep sea are increasing and, if so, at what rate.

Lola Paradinas’ PhD will look at the distribution of microplastics on Scotland’s coastline. She will compare industrial locations with more remote, pristine waters to determine whether these conditions affect the amount of plastic material found and is also considering the impact of storms on plastic distribution.

Part of the work will see the development of a customised UAV and hyperspectral camera to detect microplastics on the ocean surface.