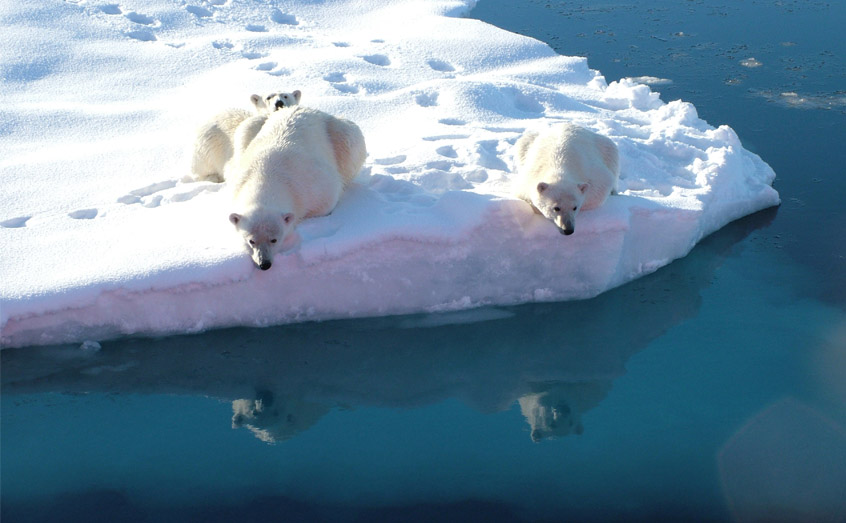 A predicted population decrease of polar bears by around 30 per cent over the next three to four decades may have been underestimated, according to research from the Scottish Association for Marine Science (SAMS).

Already bleak population predictions have considered the reduction of sea ice in the region as a loss of habitat, restricting the bears’ movements, hunting prospects and cub survival.

But research led by SAMS scientist Dr Thomas Brown, published in the journal PLOS ONE, has highlighted how the polar bear diet relies heavily on the production of microscopic algae that grow underneath the sea ice. The algae are eaten by zooplankton and this energy works its way up the food chain to the region’s top predator.

Looking at three polar bear communities in the Canadian Arctic, Dr Brown showed that, on average, 86 per cent of the energy consumed was derived from sea ice algae, as opposed to open ocean algae.

Dr Brown said: “Polar bears rely on sea ice as their habitat. Consequently, conservation assessments of polar bears identify the ongoing reduction in sea ice to represent a significant threat to their survival. However, the additional role of sea ice as an indirect source of energy to bears has been overlooked.

“The polar bears’ reliance on carbon (energy) derived from sea ice algae was surprisingly high and shows that the reduction of sea ice means more than just a loss of habitat. It threatens the success of the entire food web in the Arctic as we know it.

“We know that carbon from sea ice algae is important for Arctic animals, but we need to quantify how much of that carbon is consumed in order to understand the full impact of sea ice loss.”

Dr Brown has devised a method to measure how much of a species’ diet is derived from Arctic sea ice by tracing a chemical produced by sea ice algae, known as IP25, all the way up the food chain.

He believes the method can now be used to establish long term monitoring of polar bear diets, which could inform future conservation measures.

Sea ice cover in the Arctic circle is generally decreasing year on year. The lowest winter maximum ice extent ever recorded by satellite (1979-2017) occurred on March 7, 2017.