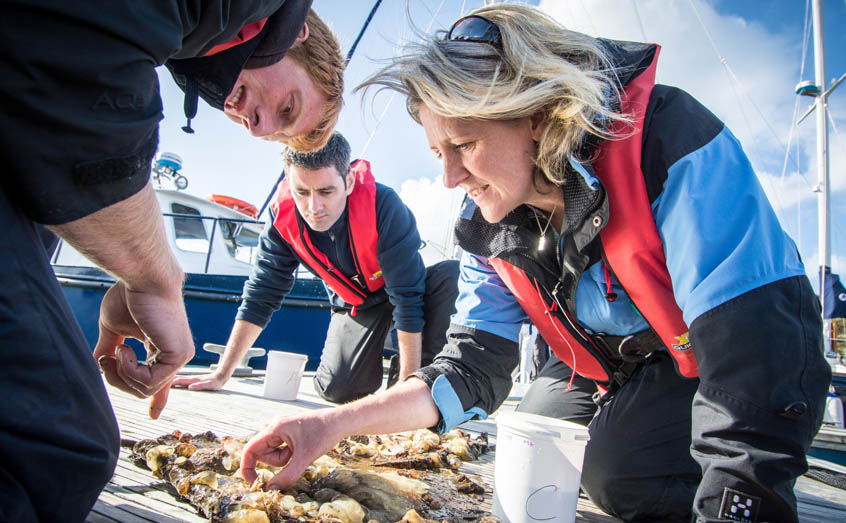 A marine ecologist who has earned a global reputation through her work at the Scottish Association for Marine Science (SAMS) UHI in Oban, has been awarded a professorship from the University of the Highlands and Islands.

Prof Elizabeth Cottier-Cook is a global authority on the impacts of invasive non-native species on the marine environment and the development of novel biosecurity techniques to minimise their introduction.

She has collaborated with colleagues in China, Canada, Chile, New Zealand, USA, numerous countries in the Mediterranean and most recently the Philippines, Indonesia and Tanzania. She also heads up the £6m RCUK-funded GlobalSeaweed STAR project (www.globalseaweed.org), which seeks to improve the sustainability of the global seaweed cultivation industry.

The mother of two, who is married to fellow SAMS UHI scientist Dr Finlo Cottier, said: “It is a great honour to have been awarded a professorship from the University of the Highlands and Islands, a university that has been growing in stature, year on year, and I am proud to play a part in that development.

“SAMS UHI has been very supportive of me in my career and has allowed me to pursue topics I am passionate about, both in terms of the academic research and teaching.”

Prof Cottier-Cook’s association with SAMS UHI began during her PhD studies in invertebrate aquaculture. Although attached to Napier University, Edinburgh, she was based at SAMS UHI during her studies.

She joined SAMS UHI at post doctorate level in 2001 and in 2006 became a lecturer in marine biology. In 2014, Prof Cottier-Cook was promoted to senior lecturer and became head of the SAMS UHI – United Nations University Associate Institute.

University of the Highlands and Islands Principal and Vice-Chancellor, Professor Clive Mulholland, said: “The title of professor is the highest level of academic achievement which can be awarded. It is reserved for individuals who are recognised as leaders in their field and have demonstrated excellence in their work. Professor Cottier-Cook is a deserving recipient of this title. She has forged links across the world and made an important contribution to our understanding of the effects of non-native species on the marine environment.”

SAMS UHI Director Prof Nicholas Owens said: “Prof Cottier-Cook is an excellent researcher and lecturer, but I also regard her as a superb role model for our young female students and researchers.

“Working part-time, she has forged and maintained a global reputation as a leader in her field of study and has proven that through hard work and a passion for your subject, you can reach your academic goals.”