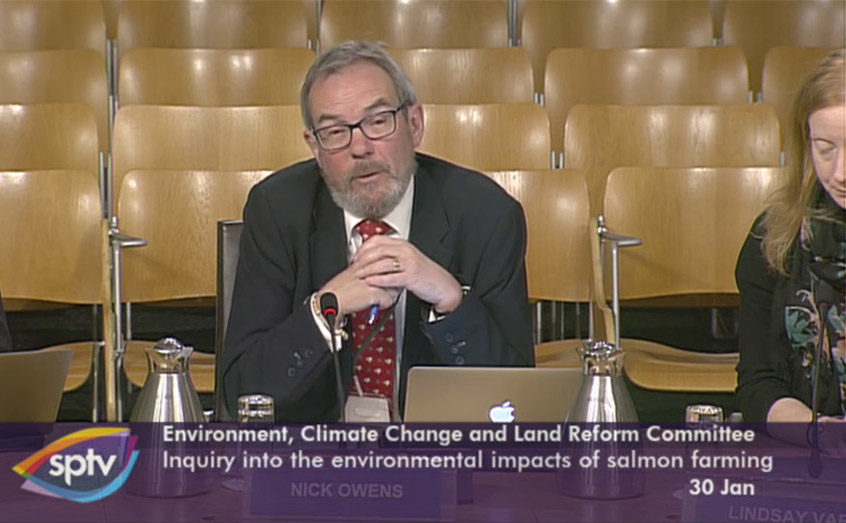 Scotland must invest in more research and consider where it will source an increasing demand for fish feed if its salmon farming industry is to keep pace with global leaders such as Norway, SAMS scientists have told MSPs.

The scientists were today (Tuesday) giving evidence to the parliament’s Environment, Climate Change and Land Reform (ECCLR) Committee on the Environmental Impacts Of Salmon Farming in Scotland, the title of a report published by SAMS last week.

However, the marine scientists explained their review of current scientific literature had identified gaps in published research into the environmental effects of the industry and a lack of available data.

Members concluded that a running theme to the session was a need for greater investment in research, when compared with aquaculture leaders like Norway.

Committee convenor Graeme Dey MSP asked how long it would take to build up a ‘body of robust science’ to fill these knowledge gaps.

Prof Owens, Director of SAMS, said: “We would need to double or treble the current effort going on in Scotland. You are looking at a decade of really intensive work and we will need to up our game by an order of magnitude.”

Committee member Alex Rowley MSP said: “Throughout this evidence session, it seems to me that there is a lack of data and research in so many areas and Norway seems to be so much further ahead than us in terms of investment and research. Would that be a fair conclusion to draw?”

“In my opinion, absolutely,” Dr Hughes responded. “The level of investment in research in Norway is much higher, as is the level of technical knowledge.”

The committee will next take evidence, on February 6, from the Scottish Salmon Producers Organisation, Scottish Environment Link, Friends of the Sound of Jura, Loch Duart, Sepa, the Scottish government and Highland Council.

A transcript of the session can be found here: http://www.parliament.scot/parliamentarybusiness/report.aspx?r=11336