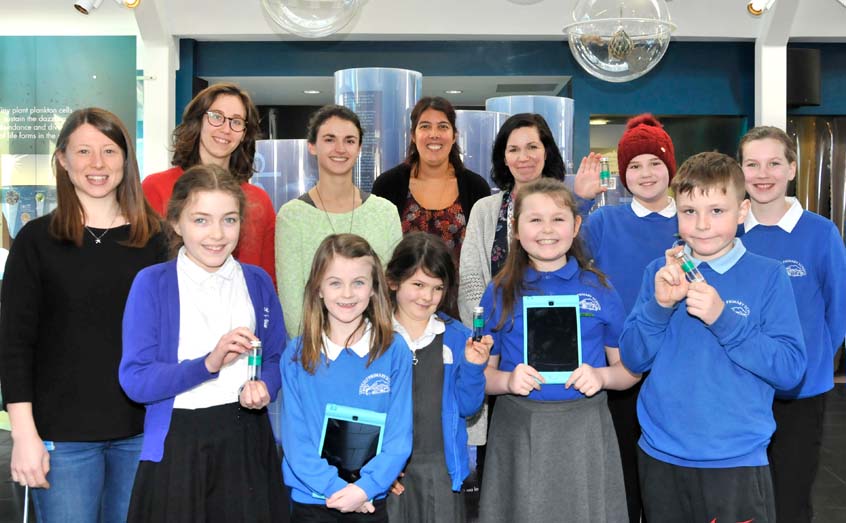 A TEAM of young environmentalists from Taynuilt Primary School visited SAMS UHI to get advice on how to help address the problem of plastic pollution in our seas.

The school’s Eco Committee is comprised of students representing each year group and has been tasked with promoting an environmentally friendly ethos at the school. They have so far helped to grow fruit and vegetables for the school canteen, built an ‘insect hotel’ in the playground and raised money to buy all 74 pupils a re-useable water bottle.

Ahead of British Science Week (March 9 – 18), the committee is turning its attention to plastic and aims to make the school plastic-straw free.

Dr Narayanaswamy said: “The Scottish Government has a clear intention to improve the uptake of STEM subjects through the Curriculum of Excellence and it is important to engage pupils in science as early as possible.

“I think this is a fantastic group of pupils, who all have really bright ideas about making their school more environmentally friendly.

“They have now heard from scientists working on marine plastics and I hope that gives them confidence to tell their fellow pupils and their mums and dads that they shouldn’t use plastic straws, and to look for alternatives, where possible, instead of using disposable plastics.”

The Eco Committee also has plans to have brightly-coloured recycling bins at the school, in order to appeal to younger school pupils.

Teacher Jenny Love, a former secondary school science teacher, said: “The idea behind the visit to SAMS UHI was to get ideas for events we can run during British Science Week and it has been great to hear about the research being done.

“The ideas for our own research all come from the pupils; they get ideas from what’s happening in the news or from environmental issues we’ve discussed in class. That way, they are the leaders of what they do, rather than just being told what to do.”