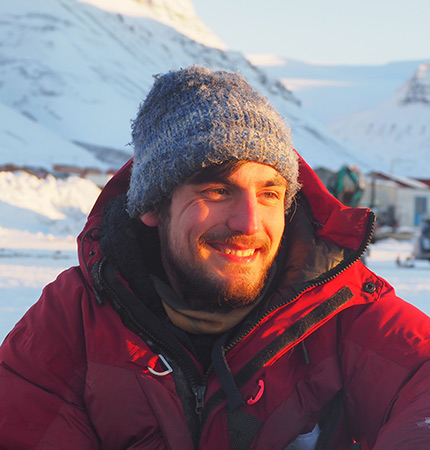 Through my bachelor studies at SAMS and the University Centre on Svalbard I followed my passion for the Arctic marine ecosystem. I am especially interested in benthic communities and how they are affected by their environment.

I am using various biomarkers to understand how seafloor organisms utilise food originating from sea ice versus from open water.

While changes in the Arctic physical system are evident in the recent reduction of ice extent, the implications this has for the ecosystem are less certain. One expected change in the ecosystem is different magnitudes, timing and distribution of primary production by ice algae and pelagic phytoplankton. Ice algae grow on the underside of sea ice and detach from it during the spring melt, sinking rapidly and providing a large food input to the seafloor. During sea ice melt, pelagic primary production starts in the water column, with phytoplankton communities gradually changing throughout the productive season. However, pelagic grazing pressure remains relatively low and a lot of organic matter reaches the benthos, where it is taken up by seafloor organisms.

The organic matter that reaches the seafloor varies in quantity and quality during the year, but there is evidence that most benthic organisms selectively retain high quality food. This project aims to quantify the relative uptake of ice algae versus pelagic phytoplankton by benthic organisms, using various biomarkers. These will be: a) IP25, a sea ice algae specific biomarker, b) stable isotopes which will allow better understanding of trophic linkages and c) total lipid amount, as a measure of level of nutrition. In addition, remote sensing data from the study area will be used to compare the faunal and ecological results with the potentially driving environmental factors.