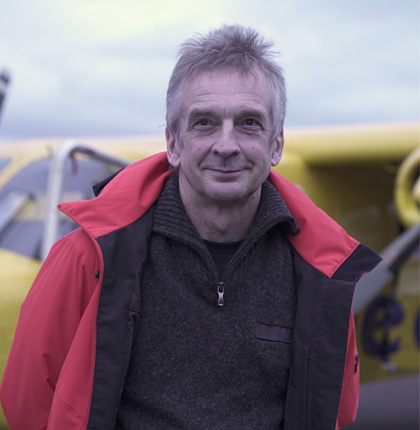 I work on the physics of coherent structures in the stable boundary layer, whilst developing the use of small robotic aircraft for measuring the structure of the atmosphere near the sea surface. With my team, I use these techniques to investigate sea-ice dynamics in the Arctic and to explain the observed dramatic reduction in summer-time sea-ice coverage.

I study the interaction between the air and the planet surface, and the relationships between vertical profiles and turbulence. I focus on the stratified Atmospheric Boundary Layer (ABL) as this is still poorly described in global or regional models due to complex feedback systems within the flow.

During my first Antarctic winter in 1986 I noticed that the turbulent atmosphere during the polar night is more complex than expected, with a variety of coherent structures apparent in fine resolution data from acoustic radar and sonic anemometers. The mechanism that generates and maintains these structures when the atmosphere is stratified (stable) but turbulent is still obscure; turbulence should act to diffuse or blur any structure, not enhance them.

Understanding this effect is of growing importance in improving the accuracy of our climate models, as parameterization schemes that derive surface fluxes from bulk meteorology are very noisy and on average biased.

My personal research still dwells in the Stable ABL, working through an international group within GEWEX trying to improve GCMs in this area by understanding the missing physics. Click here for micrometeorological data from the Halley Instrumented Clean Air Sector from 2003 to present.

In the later decades of the 20th century, ABL research focused on improving global circulation models, in order to better understand the earth climate system. More recently the growing urgency for efficient renewable eneger, especially from wind, is encouraging a more pragmatic development of ABL modeling, and with it the need for applied techniques to gather in situ validation data: not a trivial task in the marine environment.

As a direct result of the need for in situ ABL data, I am closely involved with the development of Remotely Piloted Aircraft Systems (also known as UAVs): I use a variety of UAVs, both for my own in situ atmospheric research, and to assist other science groups within SAMS and elsewhere to gather specialist terrestrial and ocean observation.

OFCAP: Identification of the mechanism for the melting of the Larsen Ice Shelf. Funded by NERC. 2009-12

I joined SAMS in the summer of 2012 as Head of Marine Technology after 27 years working at the British Antarctic Survey (BAS). I started at BAS as a field scientist and instrument designer, spending two austral winterers (1986 and 1991) at the Halley Research Station in the south Weddell Sea, and accumulated a further three years “south of the circle” during summer seasons. I gained my Ph.D. in 1994 on stratified atmospheric boundary layers.

In the 1990s I developed a number of techniques to probe the winter-time polar atmosphere, including low-power autonomous remote systems at the surface and kite, blimp and rocket instrument platforms aloft. In the last 10 years, I have concentrated on the physics of coherent structures in the stable boundary layer, whilst developing the use of small robotic aircraft for measuring the structure of the atmosphere near the surface. At SAMS these techniques help us understand sea-ice dynamics in the Arctic and explain the observed dramatic reduction in summer-time sea-ice coverage.

1988-94 Open-ended appointment as physicist, including 1991 winter at Halley Stn. BAS