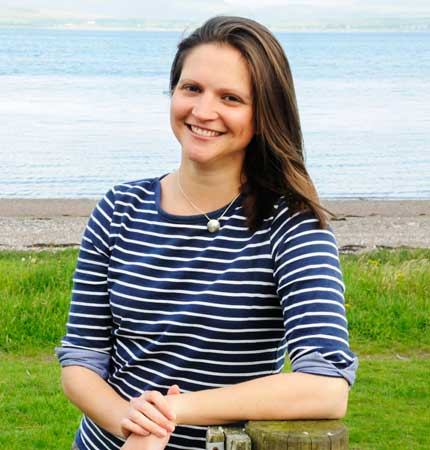 A marine ecologist using bioacoustics and a life history model to investigate inter-annual variation in the life strategies of Arctic zooplankton.

I work both at SAMS and the University of Strathclyde on two Arctic projects.

I am interested in the timing of life events of Arctic zooplankton. One particular behaviour is that of Diel Vertical Migration – an adaptation of zooplankton which allows them to feed on surface living phytoplankton during the night, and swimming to depth during the day to avoid being seen and eaten by visual predators. This behaviour is driven by sunlight, and the timing of swimming up and swimming down changes with season and latitude dependent on day length. High latitude environments (such as the Arctic) present a unique light environment as the sun doesn't set and doesn't rise for periods of time (days to month in duration) during what is known as the polar night and the midnight sun.

In addition to the daily occurring behaviour of DVM, some zooplankton (such as a group of crustaceans called copepods) enter a state of hibernation in the winter known as diapause. The timing of diapause is affected by water temperature and the timing, amount, and quality of prey (phytoplankton).

I am use a life-history model developed specifically for copepods (Coltrane) to investigate how variability in these parameters affects zooplankton, and how this might change in a future Arctic when climate change is considered.

Arctic ABC. Funded by the Research Council of Norway 2016-19: I am working on the use of acoustic data to observe zooplankton responses, and also tying in observational science with modelling work.

Arctic PRIZE. Funded by NERC 2017-20: For WP4 (Led by Kim Last) I provide integration of the quantitative aspects of zooplankton behaviour developed from acoustic data in WP4 into the trait-based modelling programme.

Circadian rhythms of Arctic zooplankton from polar twilight to polar night – patterns, processes, and ecosystem implications (CircA). Funded by the Research Council of Norway 2012-15. Read the final CircA report.

University of Strathclyde: Tutorial leader for MM116 mathematics for chemists, 2016

UHI Postgraduate Student of the Year 2016

Creation of school resources based on zooplankton migrations for age group 14-16 years, in collaboration with independent school’s consultant on behalf of Research Councils UK.

Invited speaker to a Women in Science event, targeting teenage females and their mothers. 2011

I have sourced funding for, organised, and/or run the following workshop and events:

A set of three weekend long events for the public at science centres across the UK (Dundee, Bristol, Birmingham): Sea-ice, Science, and Shackleton. Funded by Foreign and Commonwealth Office. 2014.

Two-day early career workshop (NOC Southampton, 2013): Science and Society: Do they have to be Poles apart? April 2014.

School sessions at the British Science Festivals of 2011 and 2012. Helped at event in 2010. Title of events: Life in the Freezer

Since 2017: PDRA. SAMS and University of Strathclyde