The Arctic is undergoing environmental change, which will have important ramifications for the food web.

The current approach for studying food webs via stable isotopes is, however, fundamentally flawed, as the role of varying bottom up controls on the base of the food web are neglected. This has major implications for our ability to monitor the state of the Arctic food web during this period of rapid change.

We have three main objectives encompassing observational and modelling studies. A fourth objective provides the means to link our findings to conservation and management of seals in the Arctic.

Objective 1 will constrain the spatial and temporal variability of the isoscape and determine the local and external drivers of its variability at pan-Arctic scales.

We have designed a pan-Arctic, seasonal resolved and well-integrated fieldwork campaign to achieve this objective. We will measure or access data on 15N and 13C composition of nutrients, carbon and the isoscape (POM) during NERC and project partner cruises (Hop and Dodd (NPI), von Appen (AWI), Geotraces via Francois (UBC) and Granger (UConn), Sorenson and King (NIVA)) and from riverine end members (ArcGRO, Spencer, FSU). Alongside water mass characteristics, remote sensing datasets on sea ice, surface phytoplankton biomass, and productivity (Arrigo, SU) and targeted model experiments using PISCES (Bopp, LSCE), a state of the art three-dimensional coupled physical–biogeochemical model, we will isolate the mechanisms driving variability in the isoscape. Uncertainty in representation of local physics will be assessed using a regional ocean modelling system model (ROMS, Duarte NPI).

Objective 2 will determine the sensitivity of the food web tracers in seals to the 15N and 13C composition of the isoscape and the impact on inferred trophic position.

We will directly study two harp seal stocks, the Greenland Sea or ‘west ice’ stock and the White Sea-Barents Sea or ‘east ice’ stock. We will use telemetry to study the migratory and foraging behaviour of harp seals (Haug and Biuw (IMR)) which, when linked to remote sensing datasets and hydrography from tags, will reveal the drivers behind their migration and foraging patterns.

In parallel, we will have access to seal tissues (blood, muscle, liver, whiskers) from commercial hunting programmes in the Greenland-Iceland-Norwegian Seas and Siberian sector (Haug and Biuw (IMR)) and from Inuit subsistence hunting programmes of harp (Stenson, DFO) and ringed seals (Ferguson, DFO) in the Canadian Arctic throughout the year for biomarker analysis. To study the connectivity between seals and the base of the food web, we will use 15N of amino acids (hereafter 15N-AA) and the H-print (Brown, UoP). Use of 15N-AA overcomes the problem of constraining a varying isoscape baseline because 15N-AA e.g. phenylalanine, indirectly fingerprints the base of the food web as it conservatively traces the 15N of primary producers, while ‘trophic’ amino acids, e.g. glutamic acid, are enriched during trophic transfer and so isolate a predator’s trophic position. Using this approach for seals, we can simultaneously compare the isoscape and determine both trophic position and food chain length. To determine changes in the C source at the base of the food chain, we will measure the 13C alongside the H-print biomarker. We will also have access to zooplankton and fish samples. We will compare biomarker signatures from seals with our understanding of isoscape variability from Objective 1.

Objective 3 will quantify how decadal variability affects the attribution of variations in the food web tracer signals recorded by seals to changes in the isoscape in the context of Arctic and global change.

We will have access to samples from the best available archives of ringed and harp seal teeth. Seal teeth grow throughout life and dentine layers are deposited annually, thus providing a “tape recorder” of trophic history. We will have access to teeth from (a) harp seal teeth collected from 1970’s from Newfoundland and Labrador Shelves (Stenson, DFO), (b) harp seal teeth collected from 1950’s from the west and east ice stocks in the Barents Sea (Haug, UT) and (c) ringed seal teeth collected from the 1980’s from the Canadian Arctic (Ferguson, DFO). Using the 15N-AA approach, we will simultaneously compare the isoscape, trophic position and food chain length over decadal time scales from seal teeth. We will use long-term model simulations in collaboration with NOC alongside remote sensing data sets to attribute drivers of past decadal change. Future simulations will provide the ‘signal to noise’ ratio necessary for detecting future change in the Arctic food web from tracers against the climate change signal. Finally, we will compare the foraging behaviour of seals gathered via historical telemetry data with remote sensing data sets and model output on relevant environmental variables to better understand which environmental factors have driven any observed changes in migratory patterns.

Objective 4 will quantify the effects of environmental change on seal populations.

To link Arctic environmental change, predator life history and population trends, we combine information from the laboratory, field and model studies obtained during objectives 1 to 3 to assess the impacts on harp and ringed seal body condition and vital rates, and consequences for population dynamics. We will use both statistical and structured mechanistic population models (Buren, Hammill, DFO). This will allow the practical and applied outputs of the project to be discussed in the context of management and policy for Arctic marine mammals, with potential to inform future decision making for these important populations. Interaction with working groups at NAMMCO and ICES will be facilitated by already existing experience at SMRU, SAHFOS and by project partners.

Our work focuses on constraining the spatial and seasonal variability of the isoscape and determining the local and external drivers of its variability at pan-Arctic scales. This is achieved by combining seasonal pan-Arctic observations of the nitrogen and carbon stable isotope composition of nutrients, carbon and the isoscape during NERC and project partner cruises (including riverine end members), with physical characteristics of the water masses, remote sensing datasets and targeted model experiments using a state of the art biogeochemical model to isolate the driving mechanisms. 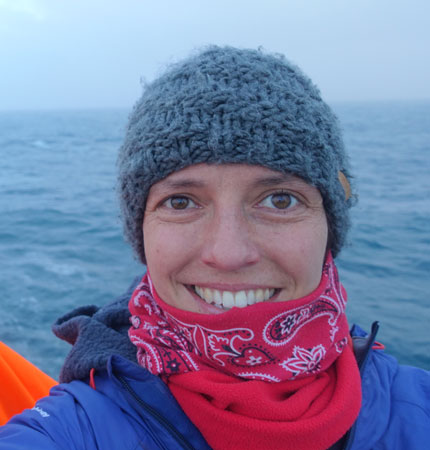