DIAPOD is led and coordinated by Professor David Pond.

The overarching goal of this proposal is to develop a predictive understanding of how Calanus in the Arctic will be affected by future climate change.

The aim of DIAPOD is to develop a predictive understanding of how the biomass dominant marine zooplankton taxon Calanus will be affected by future climate change in the Arctic.

It will synthesise past datasets of Calanus in the Arctic alongside satellite-derived data on primary production to examine whether smaller, more temperate species have been increasingly colonising of Arctic.

Furthermore, it will consider how the timing of life-cycle events may have changed over past decades and between different Arctic regions.

We will conduct field based experiments to examine how climate-driven changes in the quantity and omega-3 content of phytoplankton will affect crucial features of the Calanus life-cycle, including reproduction and lipid storage for diapause. Cutting-edge techniques will investigate how and why Calanus use stored fats to reproduce in the absence of food.

The new understanding gained will be used to produce numerical models of Calanus' life cycle for future forecasting. The research programme will develop life-cycle models of Calanus and simulate present day distribution patterns, the timing of life-cycle events, and the quantities of stored lipid (body condition), over large areas of the Arctic. These projections will be compared to historical data. We will investigate how the omega-3 fatty acid content of Calanus is affected by the food environment and in turn dictates patterns of their diapause- and reproductive success. 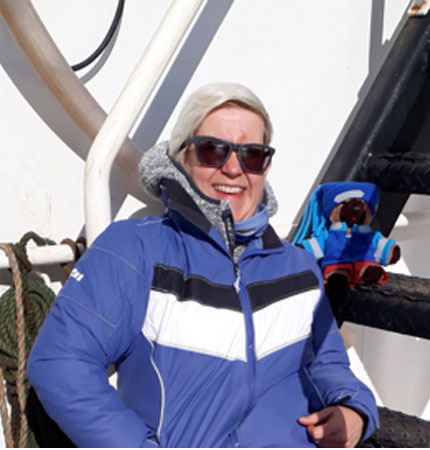 Large calanoid copepods typically constitute 50-80% of mesozooplankton biomass in the Arctic and adjacent oceans and are a key indicator species of ecosystem function. Large calanoids are crucial for channelling energy from microplankton through to fish and higher predators and also facilitate globally significant biogeochemical cycles including the Calanus lipid pump (the movement of carbon-rich lipid-based compounds into the ocean interior) (Jonasdottir et al 2015). The three dominant Arctic species, Calanus finmarchicus, C. glacialis and C. hyperboreus all accumulate substantial lipid reserves that are fundamental to their own life-history strategies, albeit to varying degrees (Falk-Petersen et al 2009). Because of differences in body size and lipid content, even shifts in the relative abundance of the three species—let alone changes in the total abundance and productivity of the Calanus complex—are hypothesized to have major effects on higher trophic levels. All three species overwinter in a dormant state (diapause) at varying depths and in doing so have the potential to transport vast quantities of organic matter into the deep ocean. Estimates for Calanus-mediated carbon transport in the North Atlantic are comparable with that exported by sinking detrital material (Jonasdottir et al 2015). Diatoms and large calanoids are sentinel taxa in the Arctic and, by developing a mechanistic understanding of their dynamics, we will be able to develop realistic predictions of future change.

One line of recent studies has provided a phenology-based view of the link between Calanus spp. and the environment: models of overall energetics (total energy/carbon in the prey field, temperature-dependent metabolic costs) have used ideas like the relative value of an egg across the annual cycle [“egg fitness”: Varpe 2012] or maximum potential diapause duration (Wilson et al. 2016) to explain many features of Calanus spp. life cycles and reproductive strategies.

Meanwhile, another line of recent studies has established a mechanistic link between microplankton species composition and the population dynamics and diapause behaviour of calanoid copepods, with successful overwintering reliant on a high dietary input of diatoms to accumulate sufficient lipid reserves, both for energetic requirements during seasonal vertical migrations, diapause itself and subsequent maturation into adults (Pond et al. 2012).

Diatoms are currently the autotrophic powerhouses of polar seas and dominate the microbial communities in open sea, ice edge and within sea-ice environments. Evidence suggests that in a warmer, fresher, more stratified Arctic, diatoms will be less abundant (Li et al 2009). Unfortunately, in existing field observations, microplankton phenology and composition are confounded, since Arctic phytoplankton communities follow relatively consistent succession patterns, from a poorly understood winter community of ice-associated production in late winter, to a spring diatom bloom, and then a summer, stratified, small-cell-dominated community.

Diatom blooms underpin the current dominance of Calanus in the Arctic by facilitating the rapid accumulation of large lipid reserves, crucial for the copepods strategy of overwintering in the deep sea.

Predictions of a future warmer Arctic suggest that microplankton communities will shift toward smaller, non-diatom species, and that the timing of diatom blooms will also shift.

We hypothesise that this scenario will lead to major demographic shifts in the Calanus complex with shifts to smaller zooplankton species and associated consequences for ecosystem function and impact on the recently recognised 'Calanus lipid pump'.

Objective 1: New understanding of the effect of prey quality and composition on Calanus growth/ingestion, synthesized into a numerical model parameterisation suitable for large-scale simulations

We will examine how the abundance and composition of the microplankton prey influences metabolism and reproduction in Calanus. By comparing the demands for carbon, nitrogen and other essential compounds required for egg production, such as PUFAs, to those supplied via ingestion and/or from maternal reserves, and after accounting for the efficiencies with which they can be utilised, we will identify the growth limiting substrate. Improved understanding of lipid-based metabolism in fuelling reproduction will enable us to better understand and predict how Calanus overwinter survival and overall production depends on their highly changeable prey field.

Objective 2: Mechanistic understanding of limits on the northward expansion of subarctic copepods (C. finmarchicus), and the controls on range expansion and contraction of Arctic-associated copepods (C. glacialis, C. hyperboreus)

Numerical model ensembles comprising multiple oceanographic models as well as complementary population-level and community-level Calanus models will be built and refined using new field and laboratory datasets, and then analysed in mechanistic terms in what will be the broadest Arctic-zooplankton model intercomparison project to date. The results will include both new
process understanding and specific recipes for population and community models ready for coupling to the UK Earth System Model (UKESM1) and parallel ocean-modelling efforts in the US and Norway.

Model hindcasts and projections will be combined with a broad synthesis of historical observational time series on Arctic Calanus from both the Atlantic and Pacific sectors, as well as satellite-derived phytoplankton-quality indices extending ~20 years. The result will be a summary view of changes in Calanus total production, Calanus size structure, Calanus lipid content (which varies by species and life strategy), and the extent to which trends in these factors reinforce or compensate for each other from the point of view of predators dependent on large, high-lipid zooplankton prey.

Objective 4: Predictive capability for changes in the Calanus lipid pump

Developing a predictive understanding of the timing of diapause entry and exit and 'parking' depth of the three calanoid species in the deep ocean is crucial information for the trait based and demographic models. A combination of data synthesis, new observational data generated as a component of this proposal, and numerical community models will be used to calculate carbon fluxes associated with Calanus vertical migration in the current and future Arctic Ocean scenarios.